Objectives:  To study the associations between measures of parental socioeconomic status ( education, financial difficulties, tenure of accommodation and occupational class) and 1) a diagnosis of autism and 2) symptoms of autism

Methods:  We used data from the Avon Longitudinal Study of Parents and Children (ALSPAC), a birth cohort study which recruited pregnant women in Bristol, England who had an expected delivery date between April 1991 and December 1992, resulting in 14062 live births. Cohort children with an ASD diagnosis were identified by record linkage with health and education records, or maternal report of having being told the child had autism (n=134). Symptoms suggestive of autism were measured using 4 scales that combine optimally within ALSPAC to predict ASD: the Children's Communication Checklist (coherence subscale), the Social and Communication Disorders Checklist, a repetitive behaviour measure, and the Emotionality, Activity and Sociability scale (sociability subscale).  These measures were dichotomised, with approximately 10% defined on each scale as having highest autistic traits. To account for selective attrition, we also used an imputed measure of autistic traits derived from factor analysis, defining scores 2 standard deviations below the mean as having higher autistic symptoms. The measures of lower socioeconomic status we defined included: lowest or no educational qualification, financial difficulties, living in rented accommodation and having a manual occupation. We used logistic regression models to assess the relationship between each measure of low socioeconomic status and a diagnosis of autism and higher traits of autism. Models were mutually adjusted for the SES measures and for sex, parity and parental ages.

Results:  Although some associations had wide confidence intervals, a consistent trend was observable in the results (see Figure). Children of parents of lower SES were more likely to have higher symptoms of autism, but appeared less likely to have received a diagnosis of autism.

Conclusions:  These findings from a large birth cohort study indicate that there may be a socioeconomic bias in the diagnostic labelling of autism- those who appeared to have higher symptoms appeared least likely to receive a diagnosis. The implications of these findings will be discussed. 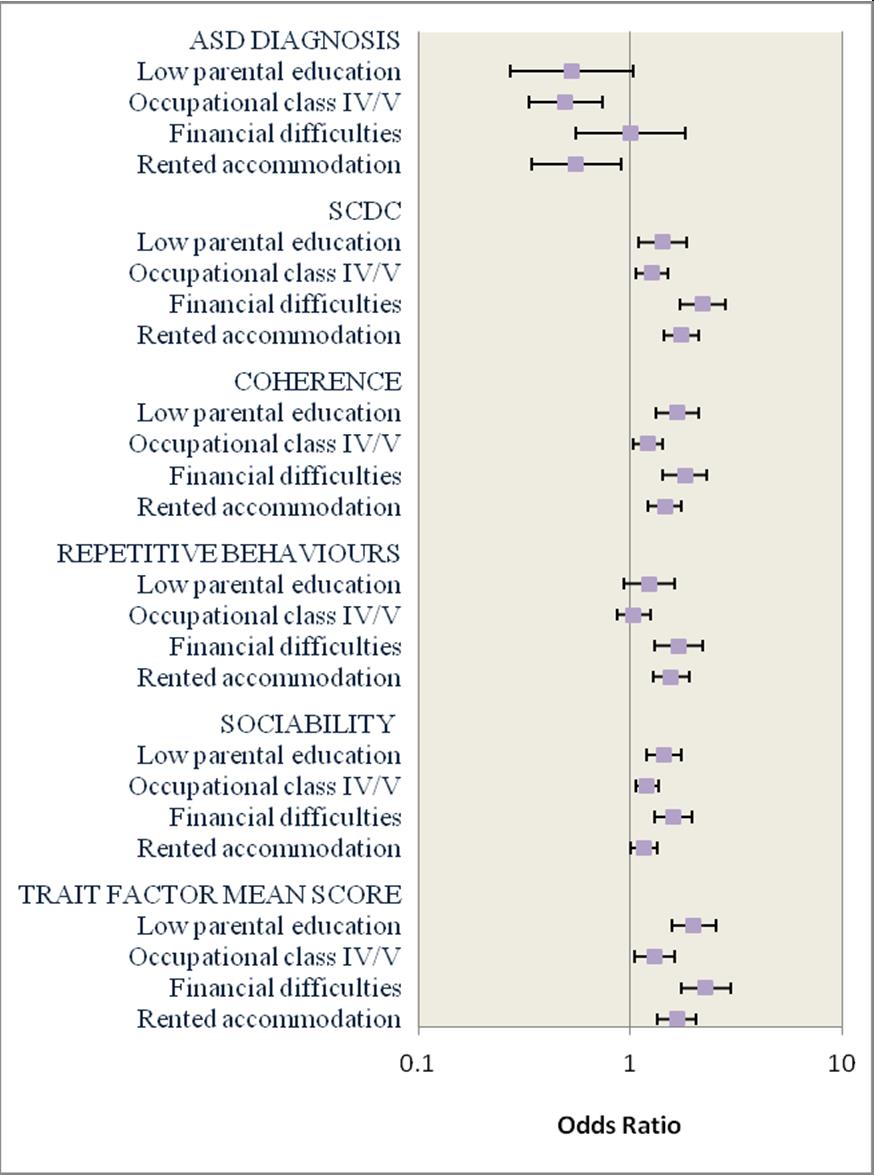