Objectives: In preparation for developing less-invasive risk biomarkers for ASD, we examined whether 3-month-old infants showed increased neural activation in response to infant-directed speech vs. other human sounds using fNIRS.

Methods: Infants were seated in their parent’s lap across from a screen and wearing the infant fNIRS headgear (optodes covering right and left temporal cortices; see Figure 1). Auditory stimuli were adapted from Shultz et al. (2014). Infants heard five 10-s blocks (pseudorandom order) for each of the three conditions: infant-directed speech (IDS), human communicative non-speech vocalizations (HCM), and human non-communicative vocalizations (HNC). Speech sounds were comprised of a set of phrases in Japanese to allow for a focus on the social, rather than language-related, aspects of speech. While the sounds played, an infant-friendly video depicting non-social stimuli played to maintain infant attention. Changes in oxygenated hemoglobin (Oxy-Hb) within the speech condition were contrasted with the non-speech conditions.

Results: Data from 14 infants were included in analyses. As depicted in Figure 2, grand average waveforms within each hemisphere indicated increased activation in the right temporal cortex in response to infant-directed speech. A t-test contrasting the speech vs. non-speech conditions revealed a significant difference in mean Oxy-Hb concentration at 4.5 to 7.5 s post stimulus, p= .02.

Conclusions: Infants exhibited increased activation to speech sounds within the first three months of life. We found increased activation to infant-directed speech within the right temporal cortex, an area often found to be sensitive to social stimuli. These findings offer important implications for understanding ASD. Specifically, it may be that a lack of neural specialization for social stimuli, including speech, within the first months of life places infants at risk for the disruptions in social development apparent in ASD. As a next step, we plan to examine whether individual differences in neural sensitivity to speech are associated with concurrent parent reports of early sociability. Future directions include longitudinally examining whether infants who are more sensitive to speech at three and six months of age are more social at 12 months and whether these early neural responses are associated with risk for ASD. 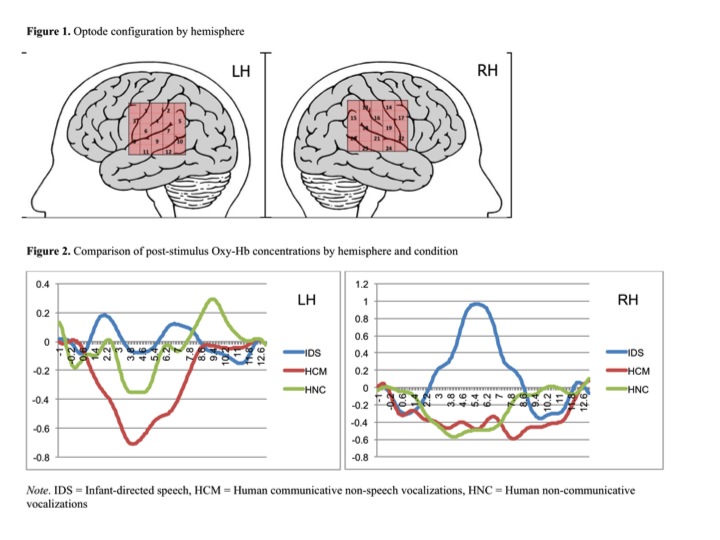