To date, there is sparse research on how children with ASD raised in bilingual environments develop language.  The few studies that have explored this issue have primarily focused on young children (i.e., 1.5 – 5 years of age), with most results showing no significant delay or deviance in the early stages of language development (Ohashi et al., 2012; Valicenti et al., 2012).  An additional concern is the use of standardized instruments in measuring language development in children, as these may underestimate the abilities of children from diverse backgrounds.  Narratives have been identified as useful tools in the assessment of bilingual typically developing children (Bedore et al., 2010); however, to date there is no published research evaluating its utility in the assessment of children with ASD from diverse language backgrounds.

The current study aims to clarify how narratives can be used to measure language abilities of children from diverse language backgrounds.

Monolingual (English) and bilingual (English/Spanish) children with Autism Spectrum Disorders who were between 8 and 14 years of age were recruited to participate.  Children were eligible to participate if they were verbal and had a nonverbal IQ of 70 or higher.  Data collected thus far includes six monolingual and nine bilingual children.  All children completed a standardized language assessment and two narratives in English (Frog, Where Are You?, Frog on his Own).  Bilingual children also completed a standardized language assessment and two narratives in Spanish (Frog Goes to Dinner; One Frog Too Many).  Parents of all children also completed a Language Background Questionnaire and the Social Communication Questionnaire. 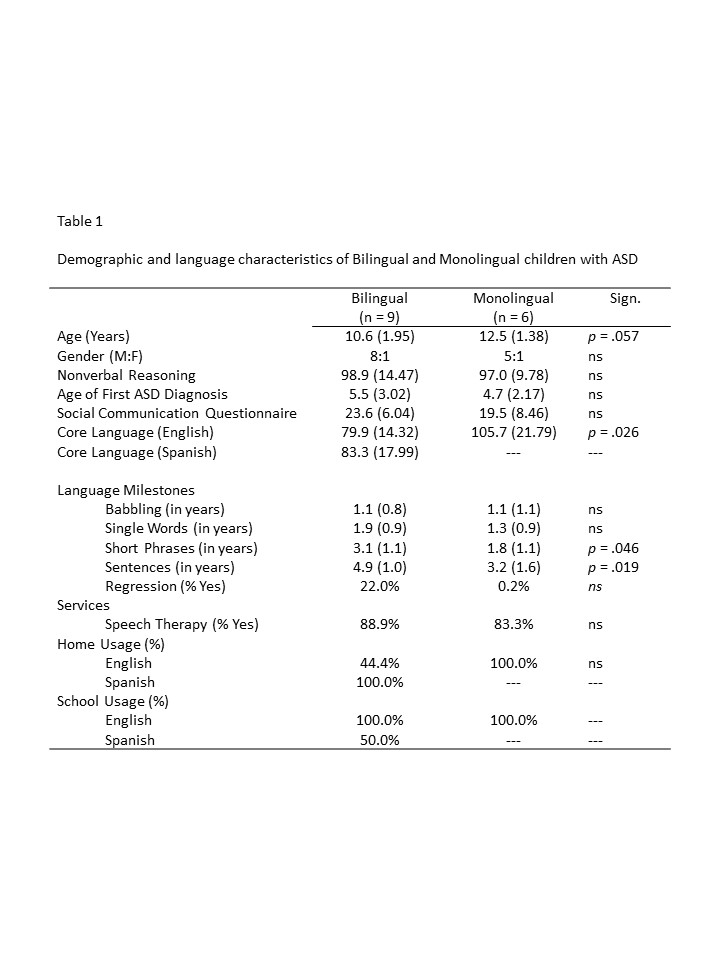