22494
Gaze Aversion and Self-Soothing at 3-Months and Social-Communicative Outcome at 12-Months for Infants at High- and Low-Risk for ASD: An Exploration of Differences in Self-Regulatory Capacities

Hall A (Baltimore Convention Center)
J. Bradshaw1, S. Shultz2, C. A. Saulnier3, W. Jones2 and A. Klin2, (1)Marcus Autism Center, Children's Healthcare of Atlanta & School of Medicine, Emory University, Atlanta, GA, (2)Department of Pediatrics, Emory University School of Medicine, Marcus Autism Center, Children's Healthcare of Atlanta, Atlanta, GA, (3)Department of Pediatrics, Marcus Autism Center, Children's Healthcare of Atlanta, Emory University, Atlanta, GA
Background: Self-regulation in the face of highly stimulating or distressing events is the primary developmental task for 2-6-months-old infants. Effective self-regulation and self-soothing during social interactions allows for sustained alertness, enhanced learning opportunities, and the development of fluid, coordinated parent-infant interactions. 3-month-old infants primarily use two methods of behavioral regulation: self-regulation through gaze aversion and self-soothing through bringing the hand to the mouth (“hand-to-mouth”). Some studies have suggested that the use of gaze aversion to self-regulate during social interaction is disrupted in 6-month-old high-risk infant siblings (e.g., Ibanez et al., 2008). However little is known about how these regulatory capacities at 3-months may promote later social-communicative abilities for high-risk or even low-risk infants. Understanding the form of self-regulatory capacities in early infancy and the function they serve for later social development will illuminate novel developmental pathways for the emergence of social-communication and development of ASD.

Objectives: The goal of the current study is to investigate self-regulatory strategies used by infants at high- and low-risk for ASD during parent-infant interactions and to associate these patterns with later developing social-communication skills

Methods: Participants included infants at high-risk (HR, N=13) and low-risk (LR, N=12) for ASD followed from 3-months through 12-months of age. At 3-months infants participated in a 30-second parent-infant interaction; parents were not touching or holding their infant to ensure the absence of potential external regulatory mechanisms. Parent-infant interactions were coded for the occurrence of self-regulatory gaze aversion (looking away from the caregiver) and self-soothing (“hand-to-mouth”). At 12-months, the Communication and Symbolic Behavior Scales (CSBS) was administered and the Social subscales were included as a measure of social-communicative ability.

Conclusions: This study provides initial results indicating comparable use of self-regulatory strategies for high-risk and low-risk infants and unique relationships to social-communicative outcome. First, results suggest that using gaze aversion to self-regulate during social interactions promotes later social-communicative development for LR infants, but not HR infants. In contrast, self-soothing was marginally, negatively associated with nonverbal social-communication for both groups. Perhaps increased self-soothing is indicative of increased distress in response to social interaction, and thus these infants are less likely to communicate with an unfamiliar examiner in an unstructured setting at 12-months. Future analyses with additional participants will strengthen findings and further elucidate these patterns. Overall, this study highlights a novel approach for exploration of the unfolding of social behavior in very young infants and suggests that early self-regulatory strategies could provide a foundational context for the emergence of social-communication. 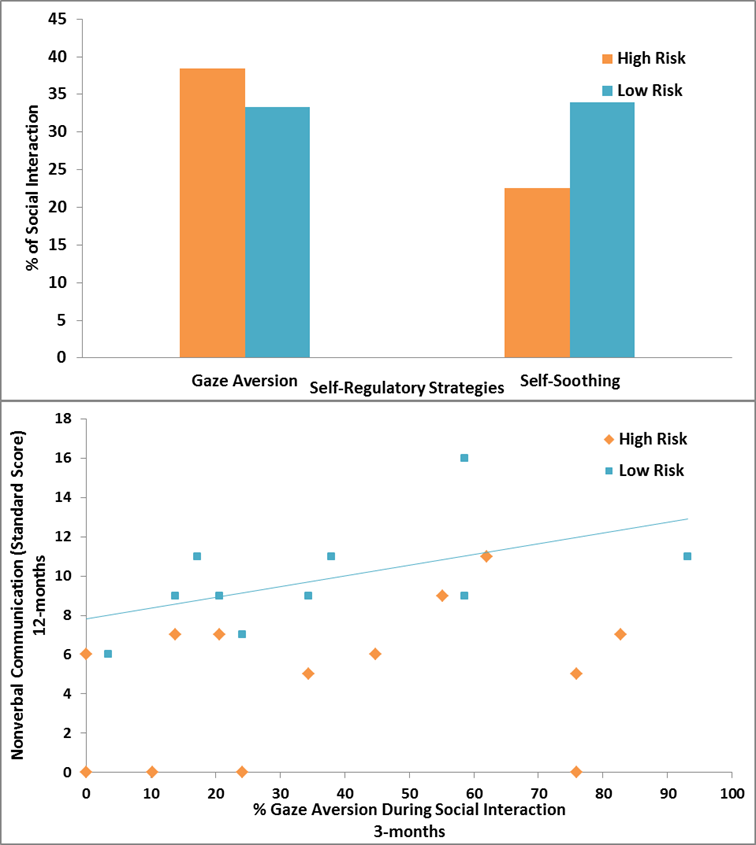