Hall A (Baltimore Convention Center)
G. Liu1, L. Kong1, D. Leslie1 and M. Murray2, (1)Public Health Sciences, Penn State College of Medicine, Hershey, PA, (2)Psychiatry, Penn State Hershey, Hershey, PA
Background:  The prevalence of autism spectrum disorder (ASD) has been increasing at an alarming rate. Despite the fact that there has been mounting evidence suggesting that ASD can be traced back to as early as the second trimester of pregnancy, most children with ASD are not diagnosed until age 4 or older. While studies from recent decades have presented substantial evidence on the effectiveness and importance of early detection and intervention, there has been little progress in identifying early markers to identify children at high risk of developing ASD.

Objectives:  In this study, we use a large, national claims database to comprehensively examine the healthcare utilization history of children during their first year of life.  The goal of this study is to develop an understanding on the medical profile of ASD-affected children during infancy and identify early indicators that are associated with the ASD risk.

Methods:  Using claims data from the MarketScan® Commercial Claims and Encounters database (2005-2013), we identified children who were born in this period and were followed up for at least one year.  We constructed a cohort of children with at least two separate diagnoses of ASD (ICD 9 codes 299.0x and 299.8x), as well as a control cohort of children with no ASD diagnosis before the age of 6. We linked their medical and demographical information to establish a complete medical profile of their first year since birth. We constructed the following healthcare utilization measures for the first year since birth: (1) healthcare expenditures (adjusted to year 2013 dollars), (2) in-/out-patient encounters, (3) hospital length of stay (in days), and (4) emergency department (ED) visits.  Furthermore, we calculated the number of ED visits during the first 6 months and used multivariable logistic regression to determine the association between the number of ED visits and age at initial ASD diagnosis.

Results:  We identified a total of 274,141 children, of whom 7,959 (2.9%) had ASD. Healthcare utilization measures during the first year of life showed significant differences (p-value <.0001) between children with ASD and those without. On average, ASD children had higher healthcare costs, more in-/out-patient encounters, longer stay in hospitals and more ED visits. In particular, the multivariable logistic regression confirmed that the frequency of ED visits in the first 6 months is significantly associated with the risk of being diagnosed with ASD later on, after controlling for gender, geographic region and residence (urban vs. rural). Compared with children without any ED visit in the first 6 months, the adjusted odd ratios (confidence intervals) of ASD risk for 1, 2, 3, and >3 ED visits were 1.24 (1.16-1.33), 1.39 (1.22-1.58), 1.93 (1.58-2.37) and 3.27 (2.63-4.06), respectively.

Conclusions:  Children who were later on diagnosed with ASD had distinct patterns of healthcare utilization even during their infancy.   They used more healthcare services than non-ASD children; even as early as within 6 months after birth, well before any clinically identifiable ASD symptoms were able to manifest. 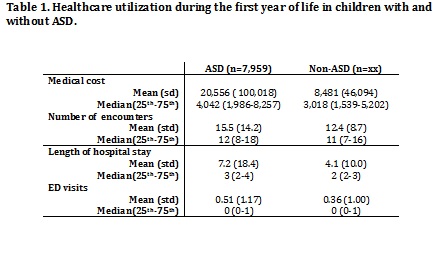