Hall A (Baltimore Convention Center)
G. Liu1, L. Kong1, D. Leslie1 and M. Murray2, (1)Public Health Sciences, Penn State College of Medicine, Hershey, PA, (2)Psychiatry, Penn State Hershey, Hershey, PA
Background:  The prevalence of ASD started to increase dramatically about a decade ago, and now the first wave of these children have approached adolescence and early adulthood. While early diagnosis and intervention have been the focus of scientific and clinical community, the population of adolescents with ASD has not received the same attention. Although various ASD related healthcare services have been designed to better serve this population, it is relatively unknown how well they are being served.

Objectives:  In this study, we use a large, national healthcare claims database to compare the healthcare utilization history (in-/out-patient medical records) of adolescents with and without ASD, with a focus on emergency department (ED) visits.  The goal of this study is to provide an understanding of the physical and mental health well-being of adolescents with ASD.

Conclusions:  Our study showed a disconcerting increase in the proportion of adolescents with ASD who had ED visits over the recent decade or so. We also observed a drastic increase in ED visits primarily associated with behavioral health service, suggesting an ASD-related mental health crisis. Finally, adolescent ASD patients living in rural areas experienced a large increase in ED visits, suggesting that this may be a particularly vulnerable population. 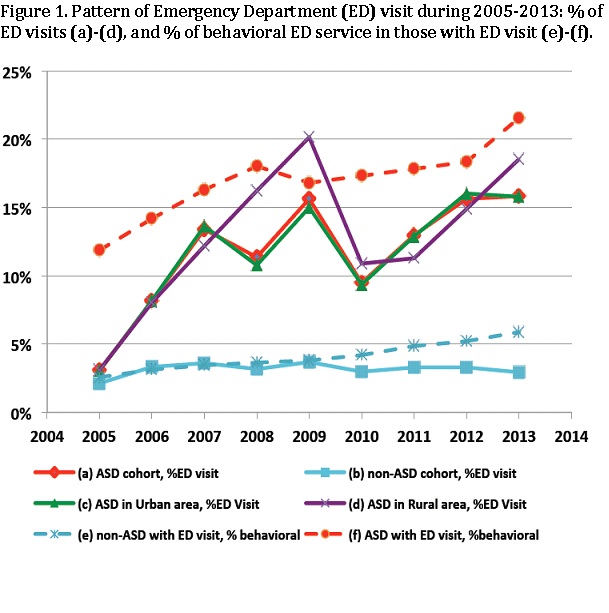