Participants included 8- to 17-year-old children with HFASD (N=70), ADHD (N=30), and typical development (TD, N=40). The groups were matched on age but varied on FIQ (99, 100, 115, respectively). Analyses control for FIQ where appropriate. ASD symptoms were confirmed with the ADOS-2 and presence of ADHD symptoms were confirmed with Conners-3 parent reports. Reading fluency and comprehension were measured with the Gray Oral Reading Test-5 (GORT-5), and a latent ToM score was comprised of scores from the Strange Stories (Happe, 1994) and the Silent Films (Devine & Hughes, 2012) tasks.

MANCOVA results indicated the HFASD group performed significantly lower than both the ADHD and TD groups on both ToM measures, λ= .88, F(2,139)=0.28,p=.76 η2p =.06.  A regression predicting Time Point 2 RC with Diagnostic Group, Time Point 1 RC, FIQ, language measures, the latent ToM Score, and the Diagnostic Group by latent ToM score interaction term revealed that the latter was significant after considering all other variables in the equation, change in R2=.07,F(1,62)=6.21,p<.02. Follow-up regressions within each of the three diagnostic groups indicated that latent ToM measure explained unique significant portion of the variance in TP2 RC for HFASD Group, but not for ADHD or TD groups (Table 1). Separate regressions revealed the association between the ToM and TP 2 RC in HFASD was significant when both the more verbal (Strange Stories) or less verbal (Silent Films) measures were used the analyses.

Results indicated that while children with HFASD did not lose reading comprehension skills, neither did they make any progress toward closing the previously-reported gap, placing them at risk for falling further behind as reading materials become increasingly more complex and integral to academic achievement. Furthermore, mental state understanding (ToM) in the HFASD group was impaired relative to the other diagnostic groups and explained unique variance in TP2 RC providing evidence that the social cognitive phenotype of ASD is important to consider when designing reading interventions for children with ASD. 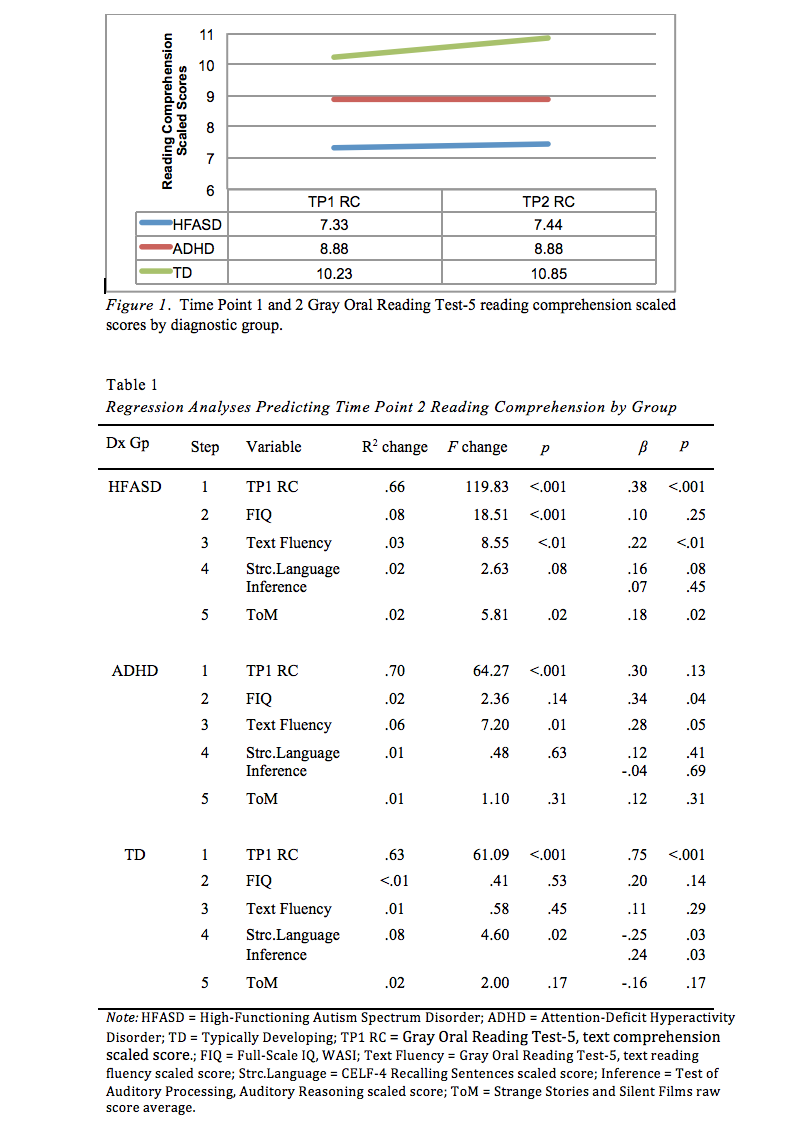