Objectives: (1) To compare frequency of ProxER and DistER strategy use in toddlers with and without ASD. (2) To investigate whether the use of these strategies is modulated by the emotional context of the situation. We hypothesized that toddlers with ASD exhibit fewer proximal and distal social ER strategies compared to the Non-ASD group across all emotional probes.

Conclusions: Overall, toddlers exhibited more distal than proximal social ER strategies, with toddlers seeking proximity to parents most frequently during Fear tasks. Both groups of toddlers used similar ER strategies in response to Fear and Frustration probes. However, while experiencing joy, toddlers with ASD were less likely to use ER strategies involving eye contact, pointing, or socially directed vocalizations and more likely to initiate physical contact. This increased use of proximal ER strategies may represent a lower level of social referencing by toddlers with ASD within contexts that encourage sharing emotions (e.g., joy) as opposed to seeking comfort (e.g., frustration, fear). Given that interventions for children with ASD often target social behaviors, these findings may help inform current approaches and lead to more effective outcomes. 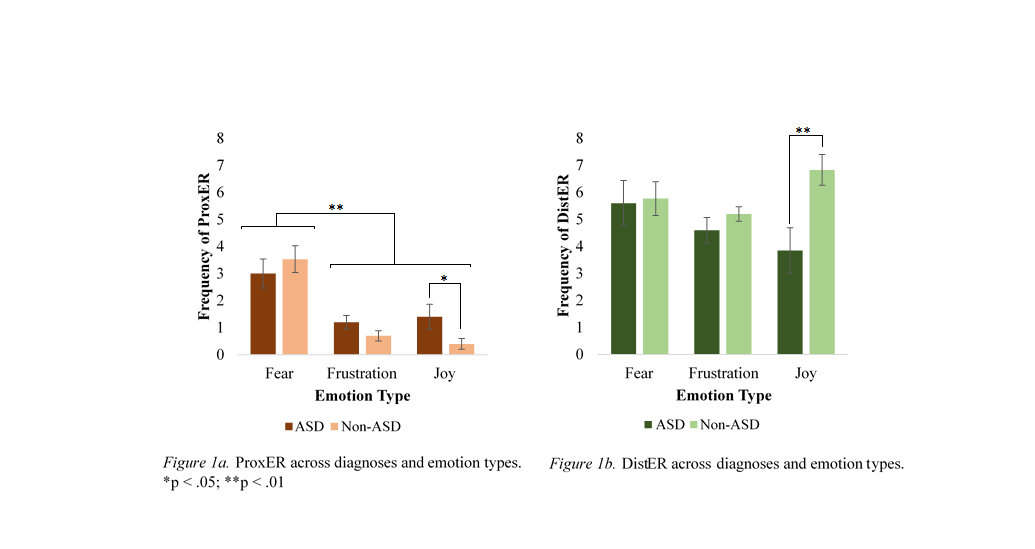