22659
Coping Skills Among Mothers of Children with Autism in Ireland and Iran: The Effect of Culture

Hall A (Baltimore Convention Center)
S. Torabian1 and S. A. Samadi2, (1)San Jose State University, Los Altos Hills, CA, (2)University of Ulster, Karaj, Iran (Islamic Republic of)
Background: Few disorders in children pose a greater threat to the psychosocial well-being of parents than autism. Several studies have demonstrated that many parents of children with autism experience depression or dysphoria. There is much evidence to suggest that the parenting burden falls more heavily on mothers therefore mothers might suffer more emotional consequences of that burden than fathers.  The stress and coping processes associated with parenting a child with autism have been the subject of much research, yet the vast majority of this research has been majorly done in the United States and other advanced nations. This is the first study that compared the coping skills of mothers of children with autism between an Eastern Culture of Iran with a Western Culture.

Objectives: The research study was a descriptive survey design based on a convenience sample. Participants completed a 15-question demographic questionnaire and the 30-question Family Crisis Oriented Personal Evaluation Scales (F-COPESs).

Methods: Each respondent completed the Likert-type scale questionnaire ranging from 1 (strongly agree) to 5 (strongly disagree). The coping scale is a reliable and valid tool that measures coping strategies and level of adaptation. F-COPES has a Cronbach’s alpha reliability of 0.86 and a test–retest reliability of 0.81. The F-COPES divides coping strategies into five subscales: (a) acquiring social support, (b) reframing, (c) seeking spiritual support, (d) mobilizing family to acquire and accept help, and (e) passive appraisal. For the Ireland population, 30 mothers were recruited from a nonprofit parental support group and various speech-language, occupational, and behavioral treatment centers in London area. For the Iranian population, 30 mothers were recruited from the Iranian Department of Special Education.

Conclusions: The results indicate that culture might play a significant role on the coping skills of mothers of children with autism. While mothers in the Western Culture of Ireland might more actively acquired support from relatives, friends, neighbors, and extended family as well having the ability to redefine stressful events in order to make them more manageable (reframing), mothers in Eastern Culture of Iran coped with having a child with autism in a more spiritual way such as believing that it was God’s faith, they seeked out more community resources and accepted help from others (mobilizing), and they appraised autism in ways of passive or inactive behaviors such as avoidance. 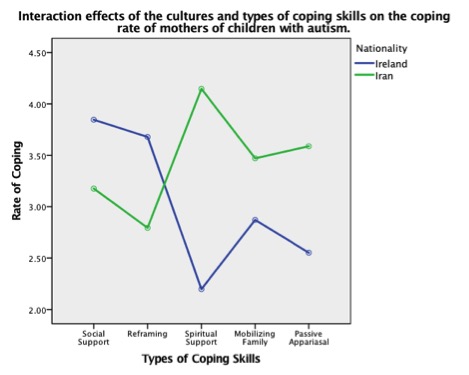