22726
Variance in Autism Prevalence Across States: Links with Insurance Policy, Availability of Clinical Resources, Proximity to Research Institutions, and Presence of Awareness-Raising Organizations

Not only are prevalence estimates of autism spectrum disorders (ASD) increasing, but marked variability in prevalence rates also exists across US states. While specific reasons for this variability remain unknown, previous studies have highlighted the influence of sociodemographic characteristics (e.g., maternal education), availability of educational and medical records, and variation in service models. However, variables related to state infrastructure such as healthcare and insurance policy, availability of clinical resources, location of federally-funded research institutions, and the presence of advocates and non-profit organizations dedicated to raising awareness about ASD have not yet been examined. Given that prevalence rates underlie policy, research, and practice decisions, understanding state infrastructure differences that impact ASD prevalence has important implications.

To determine if variation in ASD prevalence estimates across US states can be linked to between-state differences in policy, clinical resources, research institutions, and awareness.

Data for independent variables were abstracted per standardized coding schemes from publically available databases such as those on the Autism Speaks and NIH RePORTER websites. States received a 0-6 score for healthcare and insurance policy based on number of insurance mandates providing coverage for ASD. States received a clinical resource score based on the total number of diagnostic resources, intervention resources, and board certified behavior analysts present in the state. Research institution scores were based on the number of institutions with active federal funding for autism research. Finally, states received an awareness summary score based on the number of advocates and non-profit organizations dedicated to raising awareness about ASD. The dependent variables were the published CDC/ADDM Network and IDEA Part B Child Count prevalence rates for ASD.

States had on average 3.18 (SD=1.42) of the attributes of comprehensive healthcare and insurance policy. Clinical resources (M=519.42, SD=774.84), the number of research institutions performing autism research (M=5.58, SD=6.87), and the number of groups that aim to raise awareness (M=51.34, SD=61.03) varied considerably across states. Policy, clinical, research, and awareness composites were not related to CDC/ADDM prevalence rates of autism (rhos=.26-.44, all ps>.10). States with and without CDC/ADDM data were also compared. States that provided CDC/ADDM prevalence rates had better policy than those that did not (U=86.5, p=.002); no significant differences were found for clinical, research, and awareness scores between states that did and did not provide CDC/ADDM estimates (Us=151.5-192.5, all ps>.10), In contrast to the CDC/ADDM prevalence rates, higher scores on policy (rho=.28, p=.05), clinical resources (rho=.90, p<.001), research institutions (rho=.76, p<.001), and awareness (rho=.88, p<.001) were all strongly related to higher IDEA prevalence rates. See Table 1 for descriptive statistics of resource summaries by state subgroup. 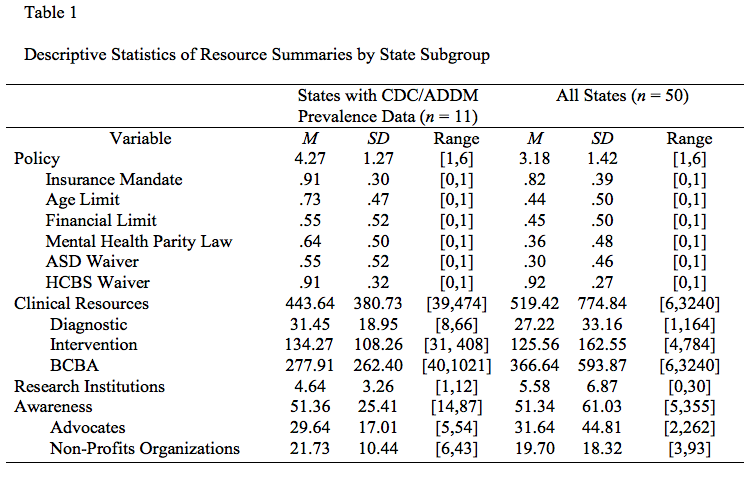