Hall A (Baltimore Convention Center)
N. Shea1, J. Kopec2, E. Payne1, E. McKernan1 and N. Russo1, (1)Syracuse University, Syracuse, NY, (2)Psychology, Syracuse University, Syracuse, NY
Background: Although not a core symptom of Autism Spectrum Disorders (ASD), externalizing symptoms such as aggression and behavior problems are common and have the potential to negatively impact daily functioning and academic achievement (Klin & Volkmar, 2000; Volker et al., 2010).  Klin & Volkmar (2010) suggested that externalizing behaviors associated with ASD may be a function of social difficulties (Klin & Volkmar, 2000). Specifically, it has been suggested that individuals with ASD engage in problem behaviors to achieve desired social responses as a result of difficulties adjusting to social demands in socially appropriate ways (Macintosh & Disssanayake, 2006).  Despite this suggestion, there has been no empirical assessment of this postulated relationship.

Objectives: The goals of this study were to (a) provide empirical evidence to support the relationship between socialization and behavior problems, (b) and to investigate whether this relationship is unique to individuals with ASD.

Methods: Participants in this study included 20 children with ASD and 34 typically developing (TD) children.  Participants with ASD met diagnostic criteria for ASD as determined by the Autism Diagnostic Observation Schedule, Second Edition, Autism Diagnostic Interview-Revised, and clinical judgment based on DSM-5 criteria.  All participants were administered the Wechsler Abbreviated Scale of Intelligence, Second Edition (WASI-II; Wechsler, 2011).  Parents of participants completed the Vineland Adaptive Behavior Scales, Second Edition (Vineland-II; Sparrow, Cicchetti, & Balla, 2005) and the Behavioral Assessment System for Children, Second Edition (BASC-2; Reynolds & Kamphaus, 2004).  Of interest to the present study were the Externalizing Problems Domain on the BASC-2 and the Socialization domain on the Vineland-II.  Participant’s ages and IQ scores are presented in Table 1.  There was a significant difference in Full Scale and Verbal IQ (but not in the Perceptual Reasoning Index) between the typically developing and ASD groups, however IQ was not significantly correlated with the relevant Vineland or BASC-2 scales for either of the two groups.

(Table 1 is uploaded as an image) 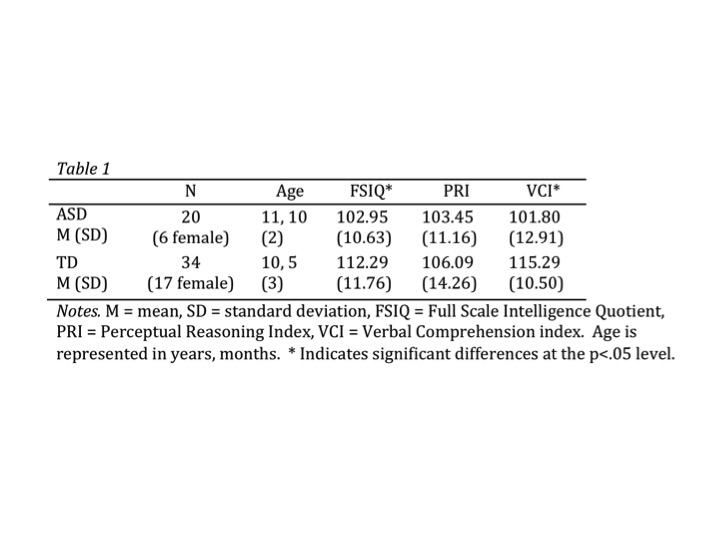