Objectives:  To develop a screening tool that identifies salient biomarkers for efficient, easy, quick and effective utilization by primary care providers (abbreviation not used again so deleted to save space). To identify infants prior to 12 months of age for ASD and DLD, and to use Chromosomal Microarray (CMA) to quantify the incidence of CNV.

Methods:  Two large pediatric groups located in suburban Maryland assessed 4 biomarkers at 9-month well baby visits (WBV). These biomarkers were: head tilt reflex (HTR), accelerated head growth and increased head circumference (HC), pulls to sit (PTS), and turns to name (TTN). The Pervasive Developmental Disorders Screening Test (PDDST) was given at 30 months as an exit screening test to identify infants who may have been missed during 9 month WBV. An absence of any of the 4 biomarker screeners, or an abnormal PDDST were indicated as “red flags” and followed up with a neurodevelopmental evaluation. Institutional Review Board approval for the study was given and updated annually.

Results:  A total of 339 typical developing infants with no known history of ASD or neurogenetic disorders were enrolled in the study. Of the 339, 302 had appropriate responses on all 4 biomarkers. 37 had abnormal results in 1 or more of the biomarkers or the PDDST.  Of the 37 with abnormal results, 23 came in for neurodevelopmental evaluations, 7 declined, 5 gave no response, and 2 did not show. From the 23 who came in for evaluations, 10 infants (43%) were identified at risk for ASD or DLD; specifically, 5 infants were identified to be at risk for ASD and 5 were identified to be at risk for DLD. So far, CMAs were completed on 11 of the 23 infants (not all in ‘at risk’ group, 8/10 at risk had CMAs completed – chart below) and 2 had CNVs (18%). Both with CNVs were part of the ‘at risk’ cohort (20%). One of the CNVs found is associated with ASD, and the other CNV places the infant at risk for an autosomal recessive genetic condition and is associated with DLD.

Conclusions:  CASS-i is an expansion of earlier findings and further supports that it’s a quick, easy and effective screening tool to identify at risk infants for ASD and DLD prior to 12 months [Samango-Sprouse et al., 2015]. The incidence of CNVs within our ‘at risk’ DLD infant population support previous findings and is supplementary to existing research of the increased incidence of CNV and ASD [Roberts et al., 2014]. 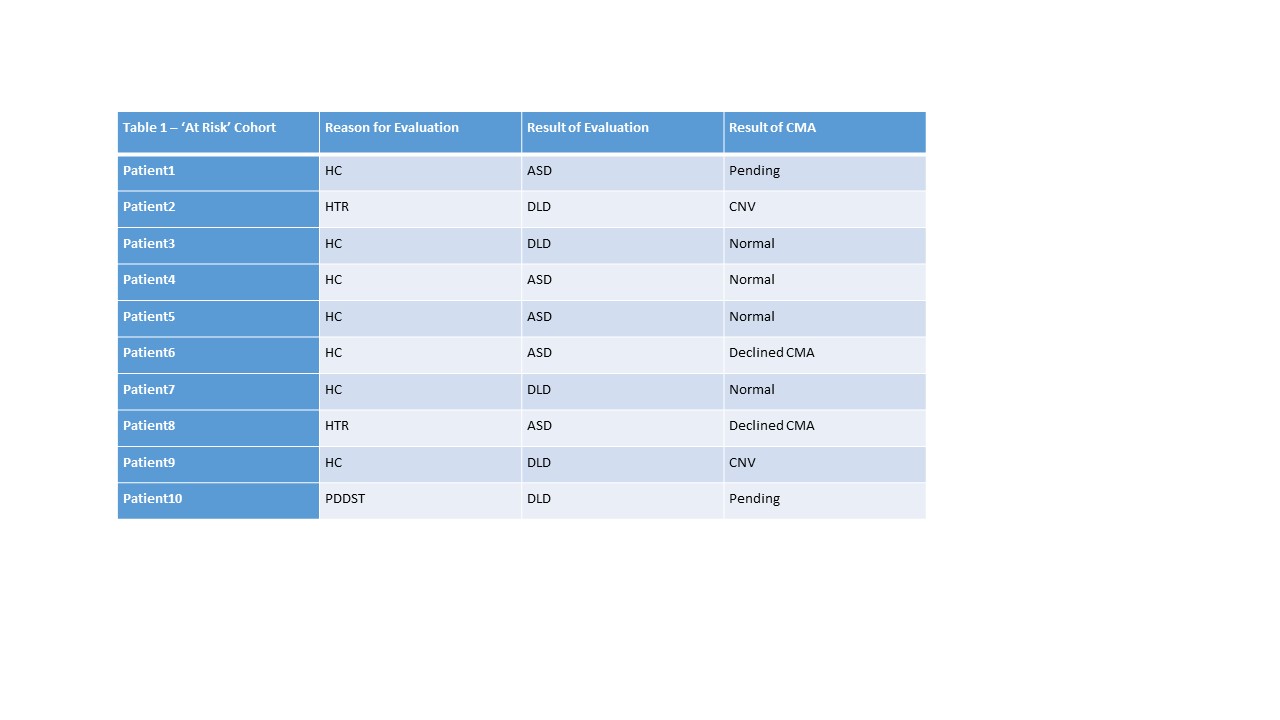