22813
Investigating Potential Biases in Self-Evaluations of Reading and Math Performance By Individuals with ASD, ADHD, and Typical Development

Hall A (Baltimore Convention Center)
J. B. McCauley1,2, M. C. Zajic3, H. K. Schiltz2, L. E. Swain-Lerro3, M. A. Harris2, T. Oswald1, N. S. McIntyre3, K. Trzesniewski2, P. C. Mundy4 and M. Solomon5, (1)University of California at Davis MIND Institute, Sacramento, CA, (2)Human Development, University of California at Davis, Davis, CA, (3)University of California at Davis MIND Institute, Davis, CA, (4)Education and Psychiatry, University of California at Davis, Sacramento, CA, (5)MIND Institute, Sacramento, CA
Background:  Self-evaluative abilities for academic competence are critical for student success. Biased self-evaluations have the potential to prevent children and adolescents from knowing when they need to work harder, and or get help from their teachers. Researchers have examined overly optimistic self-ratings of competencies, referred to as positive illusory biases (PIB), by comparing self-rated ability to performance. There is some evidence youth with autism spectrum disorder (ASD) and Attention Deficit Hyperactivity Disorder (ADHD) demonstrate PIB when assessing abilities on laboratory tasks. However, it is unclear if PIB occurs when children with ASD rate their abilities more generally on perceptions of their academic abilities in reading and math, and whether these biases are associated with self-esteem, implying they serve a self-protective function.

Objectives:  To answer these questions, we: (1) examined the extent to which youth with ASD, ADHD and typical development (TYP) displayed PIB when making self-assessments of their reading and math achievement; and (2) tested whether there was a positive association between PIB and self-esteem, suggesting the biases are self-protective.

Conclusions:  These results indicate that youth with ASD may be evaluating their math abilities in relation to arithmetic rather than problem solving ability, suggesting that they may need extra help identifying all abilities relevant to math. In addition, youth with ASD, and to some extent youth with ADHD, are not making accurate appraisals of their reading ability, but there is evidence that these biases are self-protective. Future work should develop self-assessments that help support these abilities for individuals with ASD. 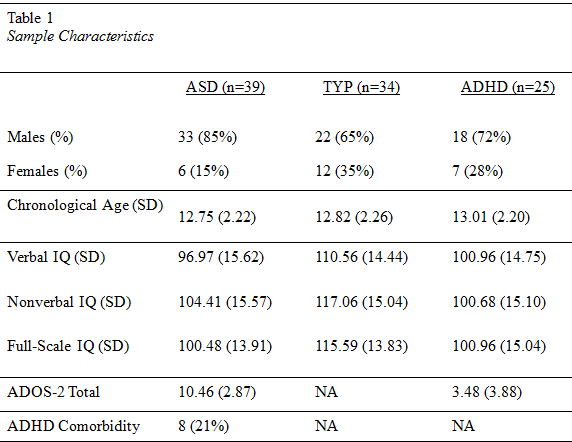