The National Research Council (2001) found that early detection and 25 hours per week of active engagement promoted optimal success for young children with autism spectrum disorder (ASD) in kindergarten.  Although intervention has the greatest impact on ASD if it begins before age three, 80% of children who need early intervention are missed (CDC, 2009; Filipek et al., 1999; NRC, 2001; USDOE, 2011). NRC (2001) along with Wong et al. (2014) of the Autism Evidence-Based Practice Review Group and the National Standards Project (2015), emphasize that evidence-based practices, such as naturalistic and parent-implemented interventions meet the criteria of  “established treatments” for individuals with ASD. However, families with access to early intervention often find that the available systems are ill prepared in the specific skills and methods needed to effectively collaborate and coach parents/caregivers (Friedman & Woods, 2012). Therefore, more innovative methods for providing support and coaching to early intervention providers (EIPs) is necessary to ensure development of knowledge and skills and translation into practice (Bransford et al., 2000).  However, there is a paucity of research on the effectiveness of  coach-the-coach models supporting EIPs with the use of technology.

This ongoing project aims to improve collaborative coaching proficiencies of EIPs across Georgia via implementation of a novel, coach-the-coach model utilizing innovative and community-viable mobile coaching technology focused on increasing knowledge of adult-learning strategies, early red flags for ASD, and supports to promote active engagement for toddlers at risk for ASD.

This study is tracking the progress of 25 EIPs across Georgia, coached to coach caregivers on increasing active engagement in toddlers at risk for ASD. Coaching of EIPs is conducted in-person quarterly, with all other weekly coaching sessions occurring via technology. Effectiveness of the coach-the-coach model is assessed using SEE-KS™ (Rubin, E. et al., 2014) three-point rating scales to determine supports coached to caregivers by the EIPs to foster engagement and support understanding and expression in toddlers at risk for ASD.  SEE-KS™ is a coaching framework based on Universal Design for Learning encompassing the principals of SCERTS® (Prizant et al., 2005).

Friedman’s Tests were used to examine differences in support ratings over time due to the small sample size. Results from the current five EIPs indicate a significant increase from baseline in supports coached to caregivers to foster engagement (p<0.0001) and to support understanding (p=0.0060) and expression (p=0.0034) during the first three months of the project (see Table 1 and Figure 1). Mean changes represent approximately 30% increase in supports coached to caregivers from Time 1 to Time 2.  Baseline scores of supports represent “treatment as usual” from the EIPs.

These data indicate that the current coach-the-coach model resulted in caregivers providing increased supports to promote engagement, understanding, and expression in toddlers at risk for ASD. Through the use of innovative technology within the coach-the-coach model, EIPs learned to effectively coach an increase in caregiver-implemented supports within three months, empowering caregivers to utilize evidence-based supports in a short amount of time. 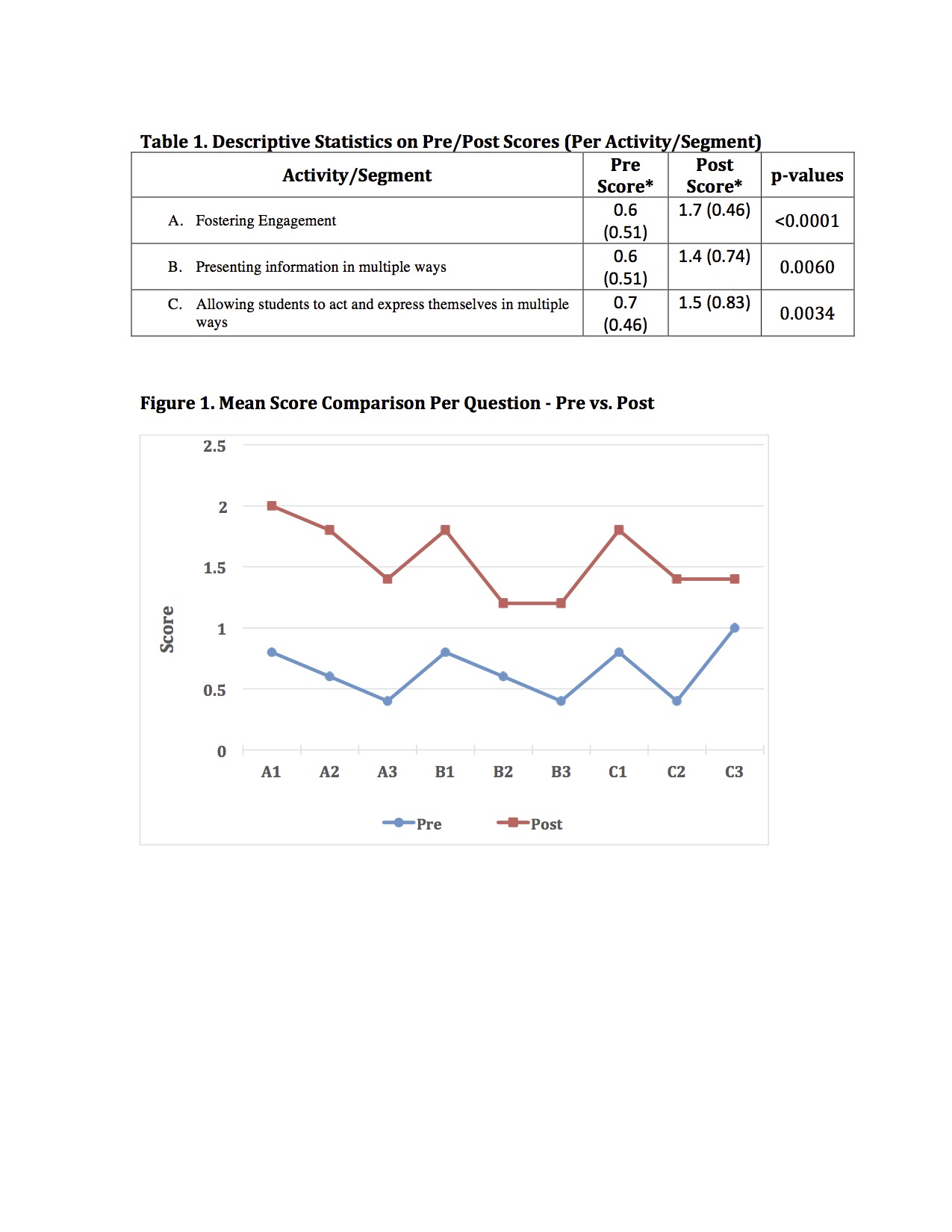