22913
Discourse Marker Usage in School-Aged Children with ASD and ADHD in a Virtual, Public Speaking Task

Hall A (Baltimore Convention Center)
N. S. Alpers-Leon1, L. Naigles2, N. S. McIntyre3 and P. C. Mundy4, (1)University of Connecticut, Vernon, CT, (2)University of Connecticut, Storrs, CT, (3)University of California at Davis MIND Institute, Davis, CA, (4)Education and Psychiatry, University of California at Davis, Sacramento, CA
Background: There has been little previous research regarding usage of discourse markers (DM’s), small words which not only ‘glue’ conversational utterances together (e.g.,‘so’, ‘like’, ‘uh’, ‘um’; Shiffrin, 1988) but also signal to an interlocutor that a conversational turn is not finished (Kam & Edwards, 2008.) DM’s may also signal a disfluency (Arnold et al., 2007) that can affect the way a listener will interpret what is to come next in the conversation and perhaps the way they judge the speaker. Previous research found that children with ASD produce ‘uh’ but not ‘um’ (Canfield et al., in press) suggesting that ‘um’ may be more social in nature as children with ASD experience social impairment.

Objectives: This study examined children’s language during a virtual reality public speaking task, designed for use with school-aged children with HFA. Language use was assessed across conditions that varied in social and non-social context, as well as higher versus lower attention demands.

Methods: 98 children aged 8-16 are currently participating in a longitudinal study of attention, social, and  academic development in children with HFA. Data are presented on 21 HFA, 22 TD, 24 ADHD, and 31 comorbid children Age- (Ms =  11.60, 12.45, 11.93, 12.12 respectively) and Verbal IQ- (Ms= 96, 111, 97,and 96 respectively) matched participants. Children viewed a virtual classroom through a head-mounted display and were asked to answer questions about their interests and daily activities while addressing 9 targets. There were three 3-minute conditions: In the Non-Social Attention condition children talked to 9 “lollipop” shaped forms positioned to their left and right in the classroom; in the Social Attention Condition children talked to 9 avatar “peers” to the left and right, and in the High-Demand Social Attention Condition they talked to 9 avatars that faded if children did not fixate on them every 15 seconds.  Children’s speech was audiotaped, transcribed, and analyzed for seven measures of language use (Mean-Length-of-Uttreance (MLU), noun types and tokens, verb types and tokens, discourse marker types and tokens).

Conclusions: All children in this study, including those with HFA are producing the DM ‘um’ contrary to previous findings. The usage of ‘um’ increases across the phases, which could be the result of a non-threatening social situation of talking to avatars or the result of cognitive load due to higher attention demands. ‘Like’ appears to be used in a similar fashion as ‘um’ or ‘uh,’ increasing in usage across phases, whereas the usage of ‘so’ remains constant across all phases and perhaps signals a causal event or conclusion. 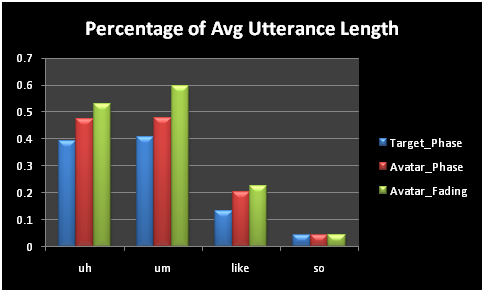