Hall A (Baltimore Convention Center)
R. Burger-Caplan1,2, A. Klin3, J. N. Constantino4 and W. Jones3, (1)Marcus Autism Center, Children's Healthcare of Atlanta & Emory University School of Medicine, Atlanta, GA, (2)Department of Psychology, Emory University, Atlanta, GA, (3)Department of Pediatrics, Emory University School of Medicine, Marcus Autism Center, Children's Healthcare of Atlanta, Atlanta, GA, (4)Washington University School of Medicine, Saint Louis, MO
Background: Autism Spectrum Disorder (ASD) is among the most highly heritable of all psychiatric disorders, with a large body of research supporting a multifaceted genetic etiology. One well-documented but still poorly understood feature of that etiology is a highly skewed sex ratio, with only one affected female with ASD for approximately every 4 males (Werling & Geschwind, 2013). It has been suggested that there may exist some mechanism of “resilience” in females such that risk factors are less potent. We hypothesize that sex-specific differences in processes of typical development (TD)—i.e. female precociousness in acquisition of communicative milestones—could serve as such a protective factor and could support female resilience to ASD. Previous research from our laboratory suggested sex-specific differences in visual attention to the mouth in the first 18 months of life, temporally and developmentally aligned with language acquisition.

Objectives: We studied sex-specific differences in both visual attention to the mouth and in language acquisition, from 2 until 40 months of life, in order to better understand their potential role as protective factors for females at risk for ASD.

Conclusions: Results indicate strong sex-specific differences in preferential visual attention beginning in very early infancy. When seen as an index of engagement with the social-communicative task of early language learning, female precociousness (increasing visual attention to the mouth more quickly than males in the first year) suggests an opportunity by which an existing sex difference of typical development might serve as a protective factor against developmental processes disrupted in ASD. Coupled together, the previously reported alignment of sex difference in mouth-fixation with sex difference in language acquisition, and the present study’s report of the disappearance of sex difference in mouth-fixation concurrent with the disappearance of sex difference in language indicate a role for female precociousness in communicative development (particularly in its earliest stages) as protective against insults to the typical trajectory of normative social development. 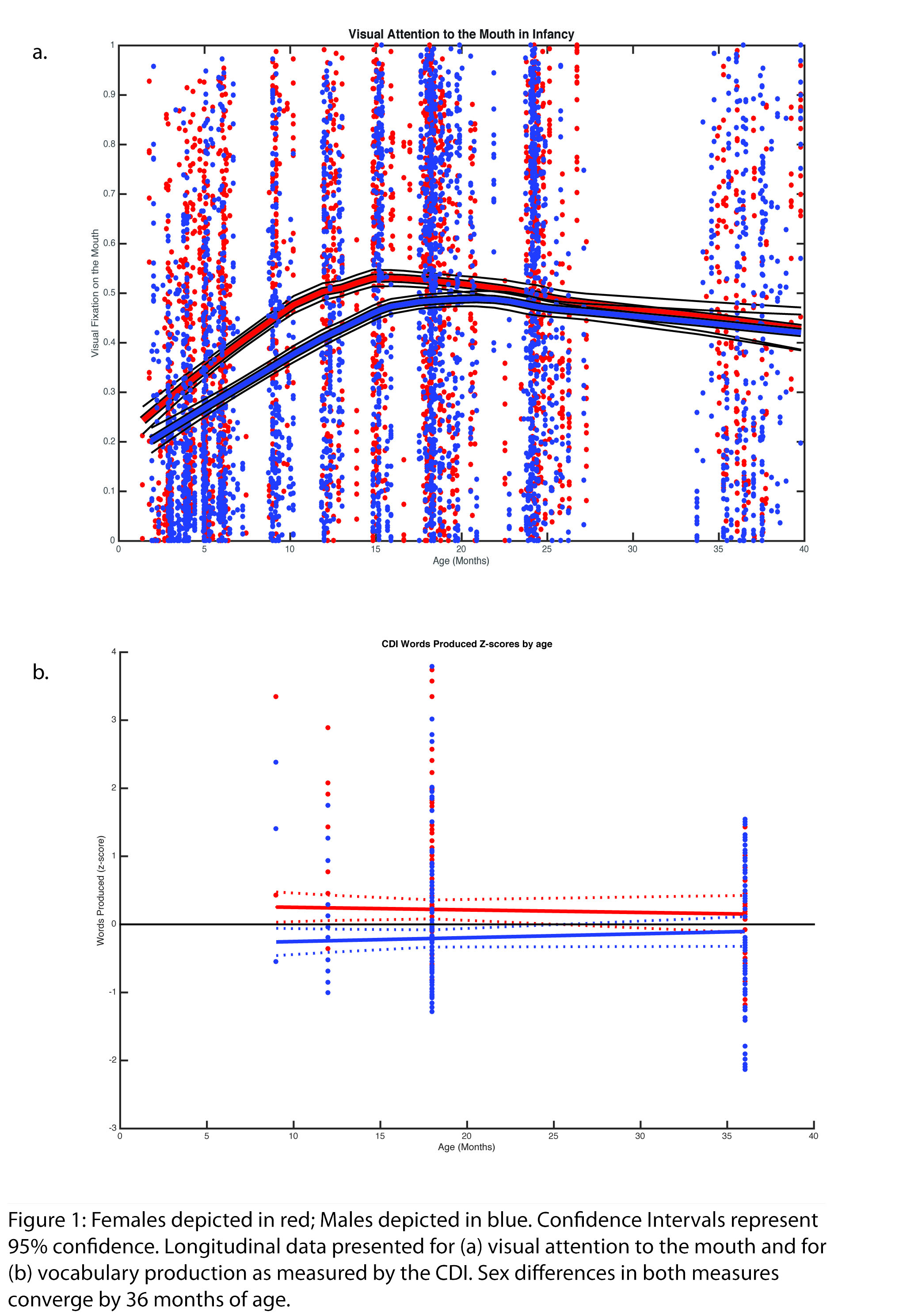