Methods:  25 children with high functioning autism (HFA) and 33 typically-developing (TD) controls, aged 8-12 years, pantomimed the use of tools while EEG was recorded. Each participant observed a picture of a tool for 3 seconds and then was signaled to pantomime the tool use for 3 seconds. Event related potentials (ERPs) were time locked to the onset of stimulus picture, with the Prepare phase computed at 0-1s and the execution phase at 3-4s relative to the stimulus picture onset. The signal was analyzed in 2 channels each from left parietal (LP1, LP2) and 2 from left central (LC1, LC2) scalp regions. Timing of ERPs was assessed using rectified area latencies, calculated using time to reach 50% of total area within the praxis tool Prepare and Execution windows. Post hoc,we examined relative latencies between parietal and central regions.

Results:  We first examined group differences in mean latencies of each of the 4 channels, separately in both Prepare and Execution phases. Only one of the left central channels (LC1) showed significant group differences, and only during Execution: children with HFA showed slower activation by an average of 67ms (p = 0.03). Post hoc, we found that LC1 activation followed LP1 (77ms, p = 0.04) activation significantly during the Execution in the HFA group. No parietal-central lag differed from zero in the TD group.

Conclusions:  In children with HFA, activation of central, motor regions during tool-use gesture pantomime was delayed compared with controls. Further, controls showed zero-lag parietal-central activation, whereas children with HFA showed a significant delay in central activation compared with parietal regions. These findings are consistent with the literature that suggests slowed transmission in the central nervous system in ASD. These findings motivate further studies of information transfer characteristics in ASD and their relationship to clinical findings. 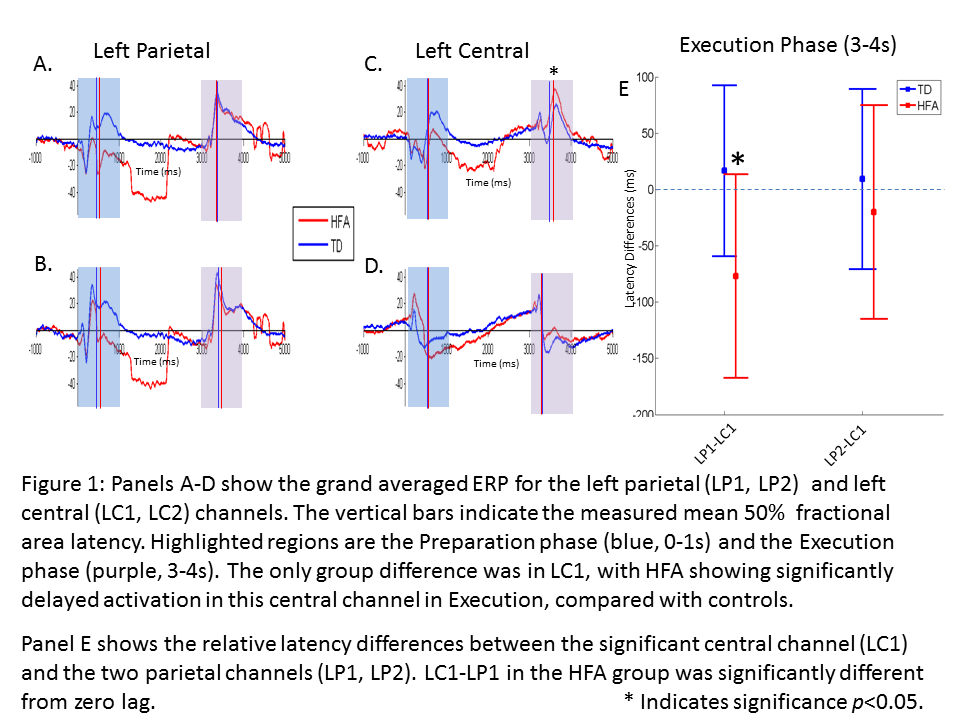