There is increasing appreciation of autism as a highly heterogeneous disorder in terms of symptom profiles, outcomes, and most likely etiologies.  Using eye-tracking technology we recently showed that a subset of ASD toddlers exhibit heightened visual fixation toward geometric, rather than social, images (Pierce et al. (2011, 2015)). It is unclear, however, if the effect identified in previous studies using the “GeoPref Test” was specific to the stimuli used, or would generalize across different stimuli.  The current study evaluated the robustness of the Geometric Preference phenomenon identified previously by creating a new test, the “Complex-Social GeoPref Test” that varied the stimulus presentation total length, scene length, and complexity of social images.  In this way we will be able to determine if eye-tracking technology can identify a specific ASD subtype that persists regardless of stimulus type.

243 toddlers (71 ASD, 72 TD, 100 Non-ASD contrast) ranging in age from 12-48 months participated.  Children were recruited primarily through the One-Year Well-Baby Check-Up (see Pierce et al., 2011).  Once enrolled, children are evaluated periodically until they receive a final diagnosis at age 3.  Each evaluation included the ADOS and Mullen, as well as eye-tracking.  Eye-tracking data were collected while children viewed a 90-second video from 60cm distance on a 17” computer monitor using the Tobii T-120Hz system.

Debate and controversy regarding the replication of findings from the biological sciences and psychology have been common in recent years (Paschler & Wagenmakers (2012)).  In contrast, the Geometric Preference effect has now been replicated multiple times in both direct, identical replication and in this conceptual replication with varied social stimuli, suggesting that toddlers with unusual visual attention profiles may represent a biologically stable, unique subtype.  Future analyses will examine data from ASD children receiving multiple GeoPref tests that suggests that those with a consistent Geometric Preference may differ in clinical symptom severity compared to those with a consistent Social Preference.  Experience dependent mechanisms play an important role during early development, and therefore toddlers with a persistently abnormal visual attention profile who prefer geometric images may potentially have a poorer prognosis than those who prefer social images. 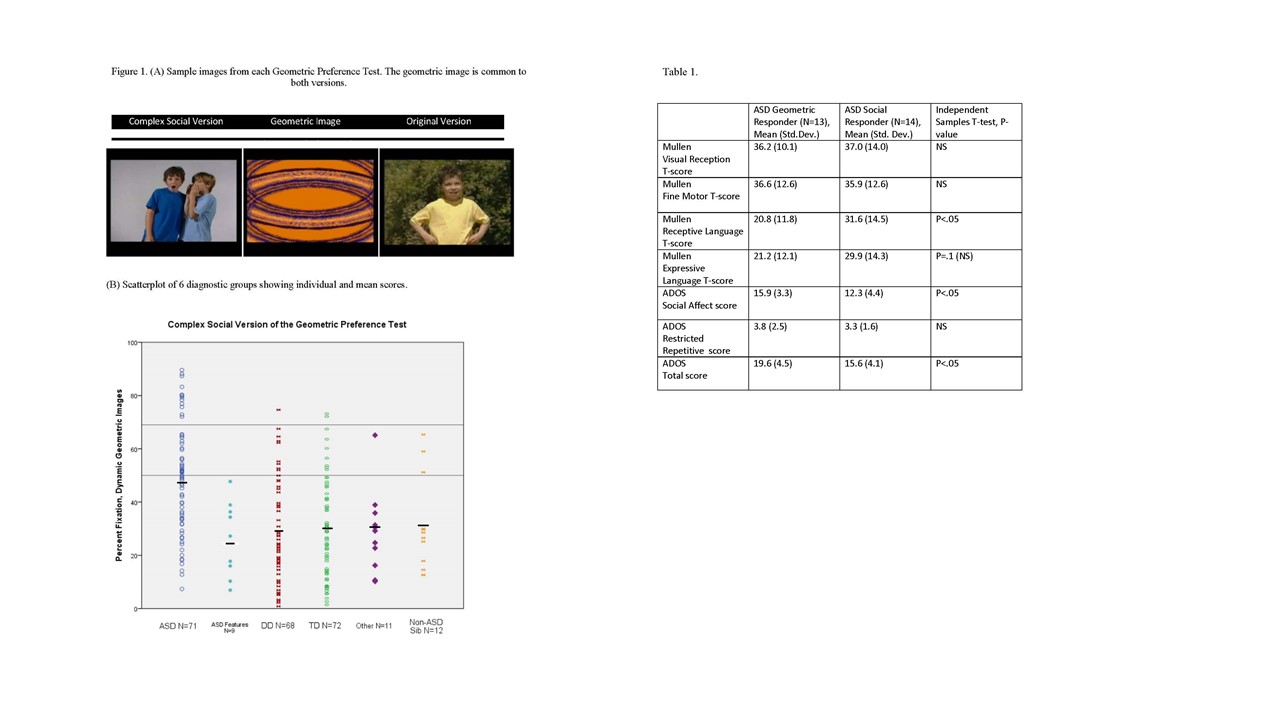