Hall A (Baltimore Convention Center)
J. Gilger1, J. Kaboski2 and M. Cain3, (1)School of Social Sciences, Humanities & Arts, University of California - Merced, Merced, CA, (2)University of Notre Dame, Notre Dame, IN, (3)Psychology, University of Notre Dame, South Bend, IN
Background:   Historically, cognitive giftedness and autism spectrum disorder (ASD) were considered mutually exclusive.  As a result, there is only a dearth of knowledge regarding those who display this unlikely combination of giftedness and ASD.  Previous studies on cognitive giftedness and ASD relied mostly on case studies with small nonrandom samples. A number of prominent researchers in the field have noted this serious lack in the literature and recommended longitudinal research with larger samples (e.g., Foley-Nicpon et al., 2011).

Objectives:  This study was designed to accurately describe the children who are identified as having both giftedness and ASD in terms of their prevalence, demographics, characteristics of schools attended, and patterns of school services utilized.  In order to understand how their academic performance may fluctuate over time, we also plotted academic trajectories as they moved from preschool through adolescence.  The results were juxtaposed against the rest of the ASD sample.

Methods:  Secondary data analysis was conducted on PEELS (Pre-Elementary Education Longitudinal Study) and SEELS (Special Education Elementary Longitudinal Study).  When combined, these datasets comprise nationally representative samples of children ages 3 through 16 who received special education services.  The sample for this study was reduced to those with the primary diagnosis of ASD (n=1642).  In this study, an individual was categorized as “gifted” if he/she: (1) scored above 90th percentile on any of the subtests on the Woodcock Johnson III achievement test; or (2) qualified for gifted/talented programs offered by the students’ school[1].  Single proportion results were compared using an independent samples proportion test comparing gifted to non-gifted participants.  Childhood trajectories were obtained by fitting children’s achievement test results over five waves of PEELS and SEELS to a multilevel model using linear and quadratic trends of age as random effects, and giftedness as a level-2 predictor for all random effects.

[1] These criteria are consistent with the conceptualization of giftedness often found in other studies.

Results:   263 (16%) of individuals with ASD could be categorized as gifted in at least one academic subject.  When gifted children were compared to their non-gifted counterparts, statistically significant differences emerged in many dimensions: the gifted subsample had more females, more racially white, higher maternal education, and higher family income.  Speech therapy was the most utilized school services for both groups.  In general, the gifted group tended to use more school services compared to those who are not gifted.  In terms of academic trajectories, there was a significant initial difference between the two groups and there was no significant change in academic performance over time in either group.

Conclusions:  The results suggest that gifted students come from a more privileged background than their non-gifted counterparts.  They also used more school services than the rest of the ASD population.  This may be a reflection of their parents’ more effective advocacy and influence rather than the actual need for more services.  Further inferential analysis is needed in order to establish causality. 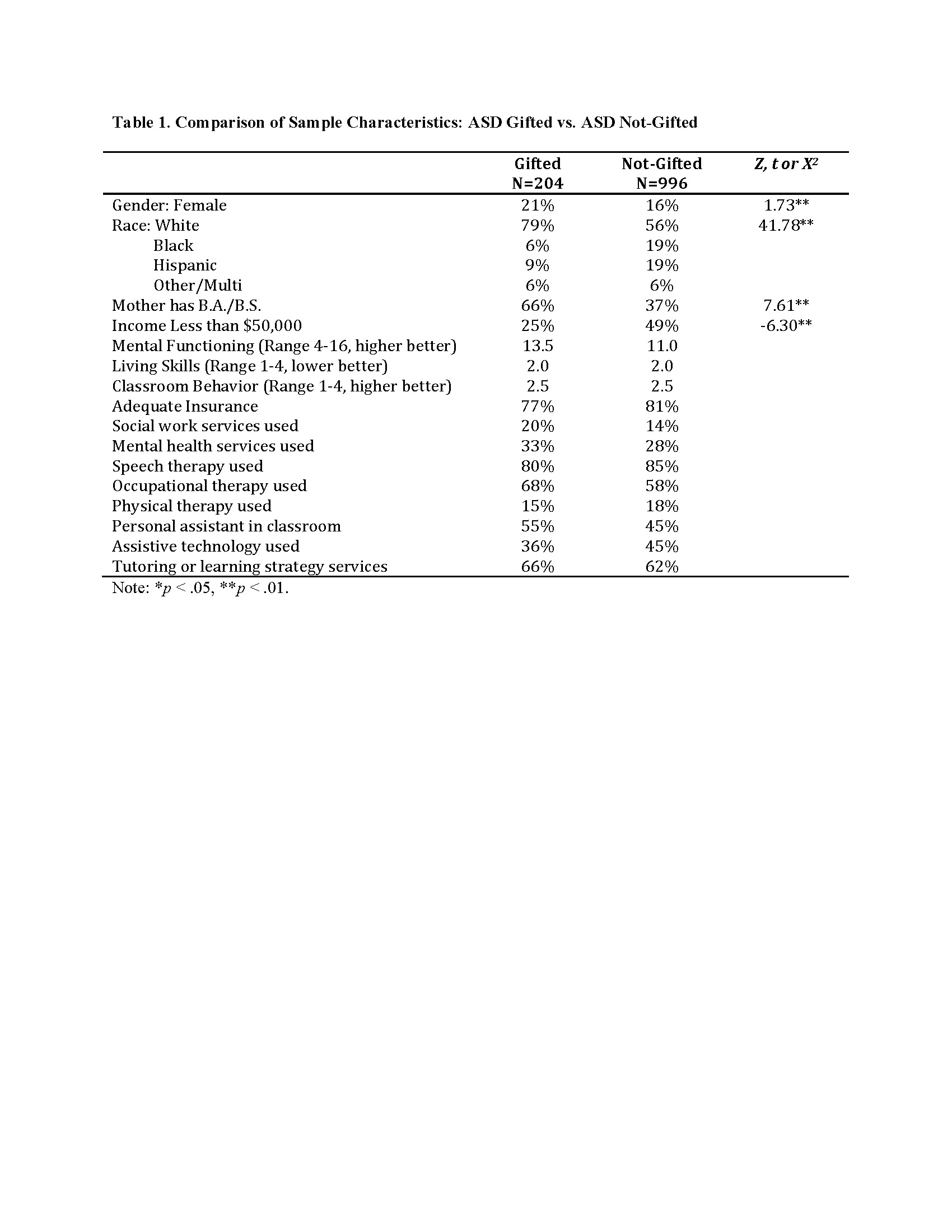