Hall A (Baltimore Convention Center)
J. Kaboski1, J. Gilger2 and M. Cain3, (1)University of Notre Dame, Notre Dame, IN, (2)School of Social Sciences, Humanities & Arts, University of California - Merced, Merced, CA, (3)Psychology, University of Notre Dame, South Bend, IN
Background:   Although the past few decades have seen an increasing interest in gifted children with ASD, adult outcomes of this population remain a mystery.  It may seem natural to presume that cognitively exceptional students would be successful in adulthood, regardless of their ASD diagnosis; however, there has not been any scientific confirmation of this presumption.  This study is an attempt to fill this gap in the literature.

Methods:   This project utilized the National Longitudinal Transition Study 2 (NLTS2).  The data were collected from a nationally representative sample of children who qualified for special education services under the primary diagnosis of autism.  Participants were 13-17 of age at the start of the data collection and 21-25 at conclusion.  Giftedness was defined as having either: (1) scored above 90thpercentile on any of the subtests on the Woodcock Johnson III achievement test; or (2) qualified for gifted/talented programs offered by the students’ school.  Regression analyses were performed on various adult outcomes: romantic relationship, employment, wage, college enrollment, and residential independence.  All adult outcomes were analyzed using logistic regression except for wage, which could be modeled using linear multiple regression.  All predictors were entered in one step.

Results:  Of the 440 individuals with ASD in this sample, 62 (14%) met the criteria for gifted.  Only 11% of the gifted, and 7% of the non-gifted reported ever being married or in a romantic relationship; this difference was not statistically significant.  In all the other adult outcome domains, gifted adults demonstrated significantly favorable results compared to their non-gifted counterparts: higher employment rate, wages, residential independence, and college enrollment.  Surprisingly, in the regression analysis using adult outcomes as dependent variable and giftedness as the primary predictor, giftedness was no longer significant when other factors such as maternal education and living skills were included in the model.  Most notably, mother’s college education was consistently significant for most of the adult outcome domains considered.  The only exception was college enrollment: being gifted was significant - along with having a mother who graduated from college, utilizing educational services in childhood, and having higher mental functioning.

Conclusions:   Cognitively gifted adults fared better than their non-gifted counterparts in a number of outcomes as predicted; however upon closer examination, it appears that their success may not necessarily be attributable to giftedness per se but to other factors that are correlated to giftedness, such as maternal college education and educational services received in childhood.  Further exploration with a special focus on environmental factors that could serve as potential points of intervention – such as health insurance, school services, medication use, and characteristics of schools – will be reported in the full presentation. 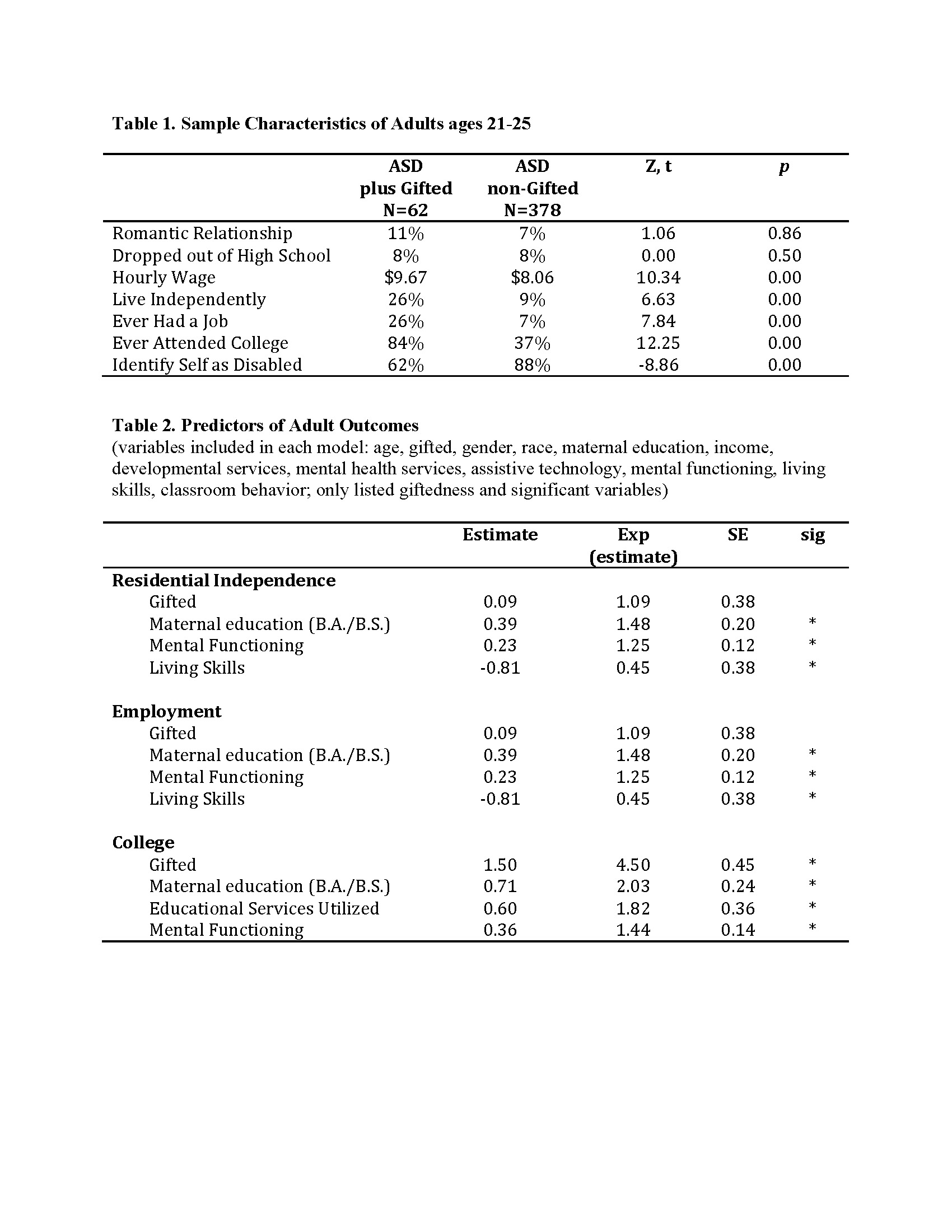