Hall A (Baltimore Convention Center)
J. D. Bleiweiss, Special Education, Hunter College, New York, NY
Background: Problem behavior significantly impedes multiple aspects of quality of life for individuals with autism spectrum disorder (ASD), and thus represents a major priority for intervention. Psychotropic medications are commonly administered to treat such behavior; however, these agents are often associated with adverse side effects that may have a negative impact on daily activities.  Many of the same symptoms such as fatigue, increased anxiety, and gastrointestinal discomfort have been identified in the behavioral literature, where they are referred to as “setting events,” and are often associated with elevated levels of problem behavior. Thus, it is plausible that medication side effects may function as biological setting events, paradoxically exacerbating the very behavior the medication aims to treat.

Objectives:   (1) To develop a comprehensive, contextualized assessment measure that assessed commonly occurring medication side effects to determine whether there is an association between the presence of these symptoms in specific home and community activities and a subsequent increase in problem behavior displayed in those same routines; (2) To demonstrate the effectiveness of using a multicomponent intervention plan to mitigate problematic routines during which side effects are present, resulting in a reduction in problem behavior displayed by individuals with ASD, as well as an overall improvement in family quality of life.

Methods: A series of studies were conducted, exploring the possibility that commonly occurring medication side effects may function as setting events, a class of contextual variables that alter ongoing stimulus-response relationships (Kantor, 1959). That is, the presence of side effects purportedly made certain home and community routines more difficult for individuals, and this, in turn, produced greater levels of problem behavior. Nine children with autism spectrum disorder who were prescribed psychotropic medication to treat severe problem behavior participated. A comprehensive assessment was conducted to identify problematic contexts in which side effects were present, and multicomponent intervention packages were developed and implemented collaboratively with each family. A multiple baseline experimental design was used to demonstrate intervention effects for these high priority contexts.

Results: We demonstrated, experimentally, that the presence of medication side effects (such as fatigue, increased hunger, gastrointestinal discomfort, etc.) did negatively impact particular family-based activities, resulting in an exacerbation of problem behavior (see Figure 1 for results of Study 1 which examined problematic home-based routines). Additionally, significant improvements were noted in problem behavior, activity completion, and overall family quality of life following the implementation of the multicomponent interventions.

Conclusions: The value of conceptualizing medication side effects as biological setting events and the direct intervention implications arising from such a conceptualization are discussed. 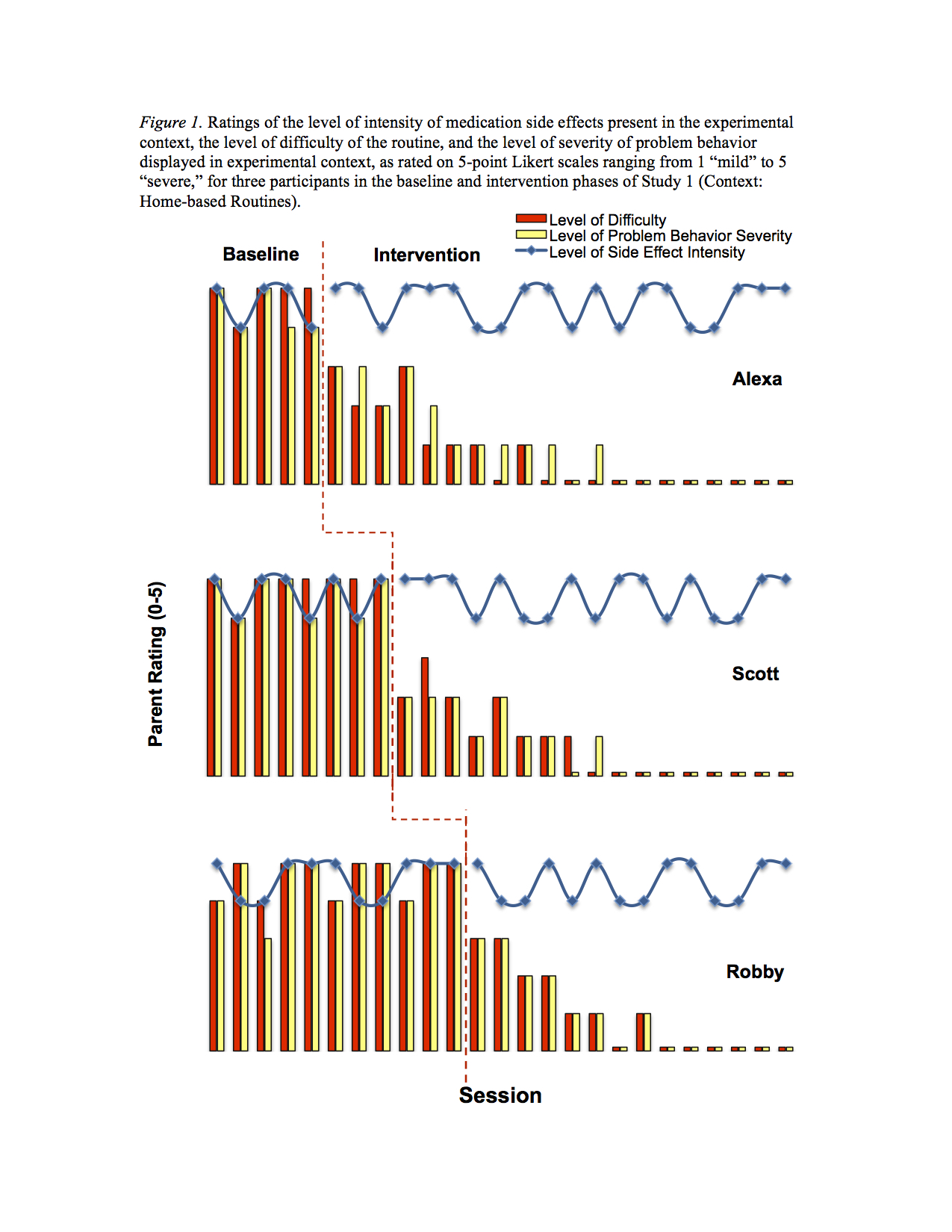