23014
Capturing the Moment: Using the Autism Observational Scale for Infants (AOSI) to Assess the Developing Phenotype in a Prospective Sample of High Risk Children for ASD

Objectives:  To assess the predictive accuracy of AOSI scores for ASD classification at 36 months in a HR infant cohort and to examine accuracy across variable AOSI cutoff scores.

Methods: Participants represented a subset of HR children in the Early Autism Risk Longitudinal Investigation (EARLI).  Infants (n=132) were given the AOSI at 6 and/or 12 months of age and an ASD diagnostic evaluation at 36 months. Diagnostic outcomes were determined by two clinicians using clinical best estimate, utilizing information from the Mullen Scales of Early Learning and Autism Diagnostic Observation Schedule (ADOS-2).  ANOVAs were conducted to assess the difference in AOSI TS at 6 and 12 months, receiver operatic characteristic (ROC) analyses examined how well AOSI TS predicted diagnostic outcome when comparing ASD/NON-ASD samples combined, and then comparing NTD/TD separately.  Spearman Correlations compared 36 month ADOS Comparison Scores to the AOSI TS at both 6 and 12 months.

Conclusions:  Our findings are consistent with previous reports of emergence of behavioral symptoms over time as the AOSI differentiated children with ASD from NTD/TD better at 12 months than 6 months. Additionally, the 12-month AOSI better differentiated ASD from TD than NTD, which is not surprising given the overlap in behavioral presentation between ASD and NTD groups.  Along with overall diagnostic classification, the 36-month ADOS was significantly correlated with the AOSI at 12 months, supporting the emergence of the ASD behavioral phenotype over time. 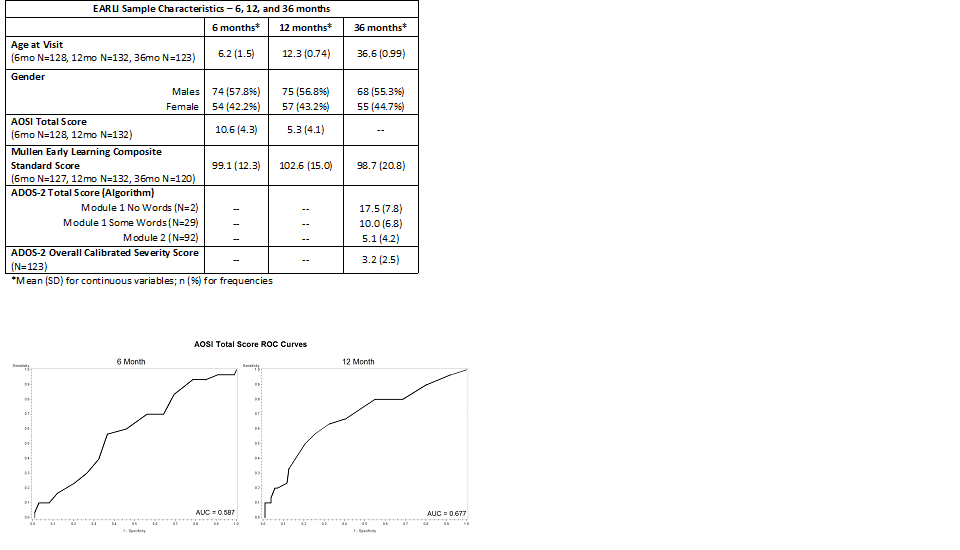