In a randomized clinical trial, (Gabriels  et al., 2015; NIH/NINR 1R01NR012736) demonstrated that therapeutic horseback riding (THR), as compared to a no horse activity control, benefitted children with autism spectrum disorder (ASD) on measures of irritability, hyperactivity, social cognition and social communication, along with the total number of words and new words spoken during a standardized language sample.

Objectives:  To examine whether results reported by Gabriels and colleagues (2015) can be replicated,, determine the feasibility of collecting saliva samples from children with ASD, and explore the effect of THR on individual differences in children’s cortisol levels

Methods:  Sixteen participants, 6-16 years old with a diagnosis of ASD were randomized with 1:1 ratio into either THR or no-horse barn activity control group (BA). Other inclusion criteria include a combined score of 11 points or higher on the Irritability and Stereotypic Behavior subscales of the ABC-C and nonverbal IQ ≥ 40. Exclusion criteria included physical or behavioral issues that would prevent participation, a history of animal abuse or phobia to horses, more than two hours of EAAT experience within the past six months, or taking steroid medications. Pre- and post-intervention evaluation of Systematic Analysis of Language Transcripts (SALT) were conducted by a speech therapist blinded to intervention condition. A designated caregiver for each participant completed the ABC-C and Social Responsiveness Scale (SRS).  Salivary samples were collected pre- and 20 minutes post- THR group sessions and later assayed for cortisol

THR-related behavior response patterns are presented in Figure 1 and Table 1.  The effect of THR, as compared to BA control, was significant on hyperactivity (p<0.05) and marginally significant (ps<0.1) on irritability and social communication.   Pre- and post-intervention saliva cortisol were successfully collected in 90% and 40% of the interventions sessions respectively for THR and Barn groups] Linear mixed effects model analysis indicated that greater irritability was associated with greater post-intervention reduction in cortisol in the THR group (p=0.05) and in the Barn group (each p=0.10); Greater hyperactivity is associated with greater cortisol reduction in THR group (p<0.05) but not in the barn group.

The effects observed in the prior THR RCT were partially replicated. It was feasible to collect saliva from children with ASD at the riding center. Although this preliminary study did not have sufficient statistical power to evaluate effects on salivary cortisol as outcome for assessing immediate effects of the THR intervention on HPA activity, results suggest that salivary cortisol may be a promising measure for future investigations to explore the mechanisms of THR as having a sensory/calming effect on children with ASD. 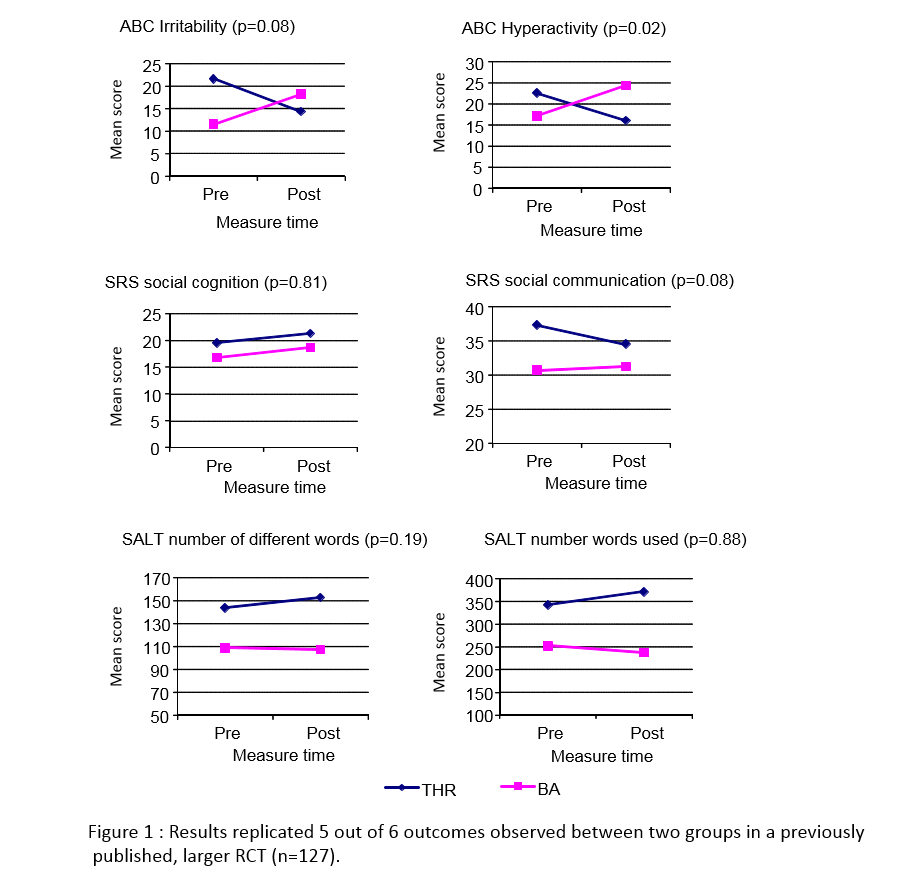