Autism Spectrum Disorder (ASD) is characterized by deficits in social skills that develop early in infancy, including impairments in social orienting, joint attention, and empathy (Dawson et al., 2004).  Early impairments in attending to social situations are posited to deprive children of social information that subsequently limits the development of other social skills (Mundy & Neal, 2001). Understanding how these early social skills build incrementally upon each other is crucial for building a developmental model of ASD, identifying target areas for intervention, and establishing a timeframe for beginning early interventions.

Identify the extent to which concurrent social orienting and joint attention skills predict infants’ empathic responses at 12 and 15 months.

As empathy develops between 12 and 15 months, infants with deficits in RJA or social orienting also attend less and display less affect to another’s distress. Attention was even lower when infants had deficits in both RJA and social orienting. However, infants attended more when they exhibited the more advanced skill (RJA) regardless of whether or not they failed the developmentally easier skill (social orienting).  Together these findings help us understand how these social skills develop in relation to each other and may inform early intervention strategies. 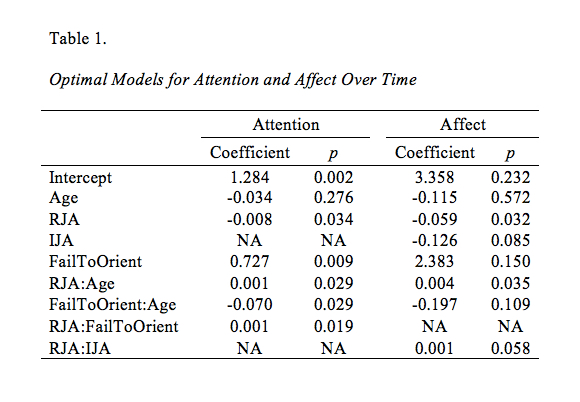