Background: Recent studies suggest that up to 20% of women suffer from mood or anxiety disorders during pregnancy. Although there is evidence that psychiatric disorders are more common in mothers of children with intellectual disability (ID), few have assessed maternal mental health diagnosis while pregnant and the possible effect on a fetus.

Objectives: We investigated the extent to which maternal psychiatric diagnoses during pre- and peri-natal hospitalizations were associated with offspring ID in a large, socio-demographically diverse 18-year statewide birth cohort.

Results: California children with ID were similar to those in other studies, with inflated risk for males, older parents, lower maternal education and Black race. In adjusted analysis, mothers diagnosed with any psychiatric condition during pregnancy – mood and anxiety disorders as well as schizophrenia – were 73% more likely compared to women without psychiatric conditions to have child diagnosed with ID (Figure 1). Mothers diagnosed with eachspecific individual psychiatric condition were 1.48- 2.39 times more likely to have a child with ID (Figure 2), with higher risk in women with psychoses than in those with anxiety and depressive disorders.  The correlation between maternal mental health diagnoses and ID varied minimally by severity of ID, with more severe variants less common and confidence intervals widened, and was consistent across all categories of co-morbidity except for seizures (Figure 2).  Compared to mothers without mental health issues, those with schizophrenia had a four-fold increased chance that their child’s ID would be severe with an IQ of 25-40, and that the child would be diagnosed with cerebral palsy as well.

Conclusions: Women diagnosed with a psychiatric disorder during pregnancy were 73% more likely compared with women without such diagnoses to have a child diagnosed with ID.  Mechanisms that may explain these associations involve genetic predisposition, maternal stress, fetal exposure to certain psychiatric medications, and variations in early formal and information support for the child. These findings emphasize the need for routine prenatal screening for psychiatric conditions and timely interventions directed to optimization of maternal wellbeing as well as fetal and early postnatal neurodevelopment. Further, these results underscore the need for targeted developmental monitoring of children born to women with psychiatric conditions to detect early signs of ID and implement early intervention at the earliest possible opportunity. 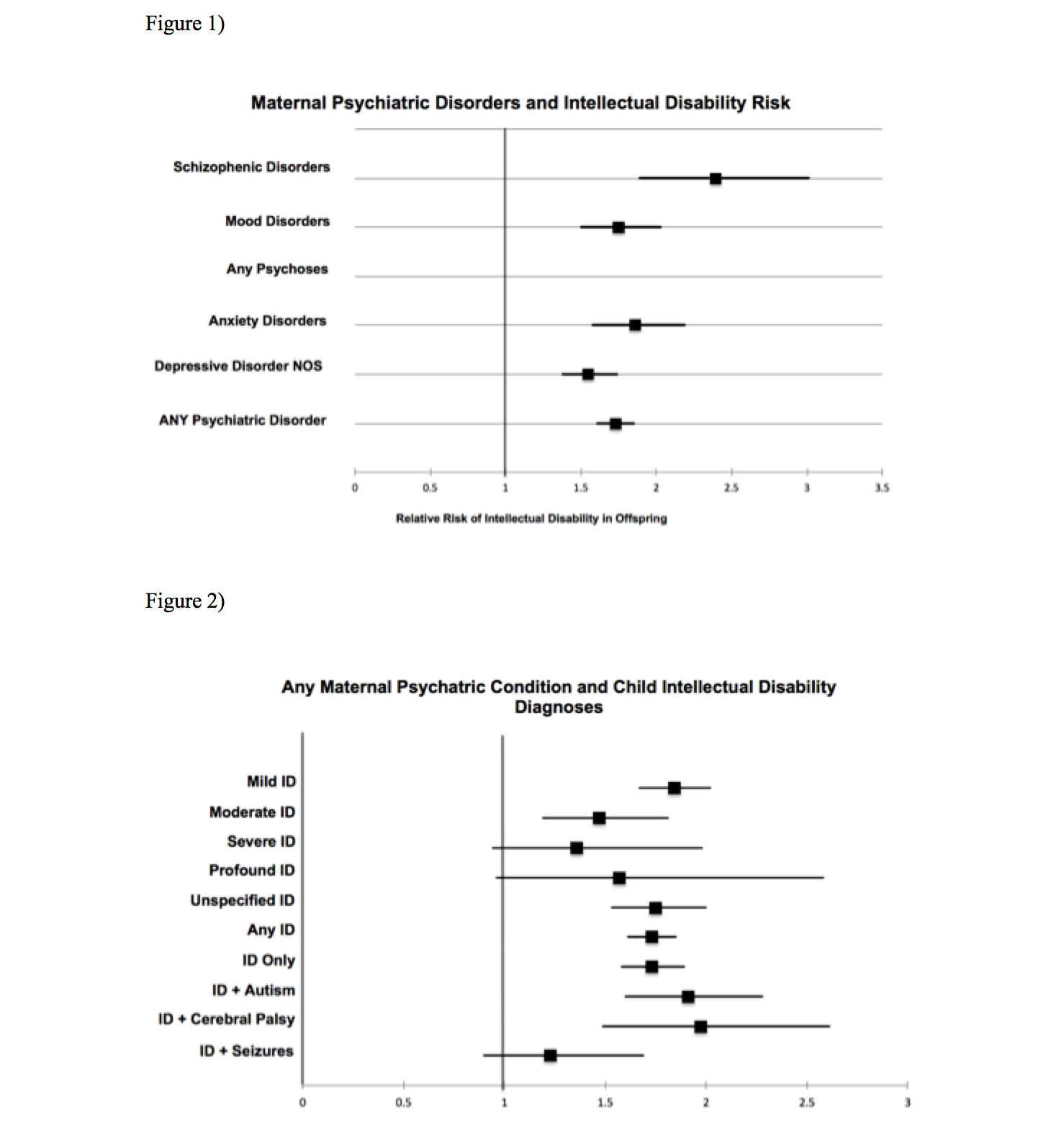