Objectives: Compare rates of looking to faces versus hands in the context of joint play and parallel play in children with ASD and typical controls, and assess whether looking patterns correlate with clinical ratings of autism severity.

Methods: Participants (ASD: N=154; TDC: N=66; Table 1) watched videos of children engaged in either joint interactive play or parallel play. A Tobii X120 infrared eye tracker recorded the direction and duration of participants’ gaze to dynamic areas of interest (AOI) that were drawn around the faces and hands of actors while they played with toys. We calculated the proportion of participants’ gaze to each AOI type relative to their total attention on the full screen. We used calibrated severity scores from the ADOS-2 for correlations. Groups differed on IQ and age, so we entered these variables as covariates.

Results: An analysis of covariance with condition (joint, parallel) and stimulus type (face, hands) as within-subjects factors and diagnosis (ASD, TDC) as a between-subjects factor revealed a significant 3-way interaction, F(1,213)=14.15, p<.001, ηp2=.06. Both groups increased looking to faces in the joint vs. parallel condition (ps<.05), but the ASD group looked less at faces and more at hands than the TDC group in the joint condition (ps<.001 and .02; no differences in the parallel condition; Figure 1). Total proportion of gaze to faces in the joint condition was negatively correlated with ADOS-2 severity scores in the ASD group (Pearson=-.18, p=.03).

Conclusions: Children with ASD and control participants looked more at faces during nonverbal communication, but this effect was dampened in ASD. Reduced gaze to faces in a communicative context was associated with increased ASD symptoms. Between now and May 2016, we will assess test-retest reliability of this paradigm in 90 participants that provided 2 time points, analyze existing data from an additional 60 participants (including 30 adults with ASD), and recruit 30 typical participants to match our ASD adults, thus extending our analysis into adulthood to examine effects of age on visual attention to faces. We will discuss special challenges and rewards associated with collecting gaze data across multiple years in a heterogeneous population. 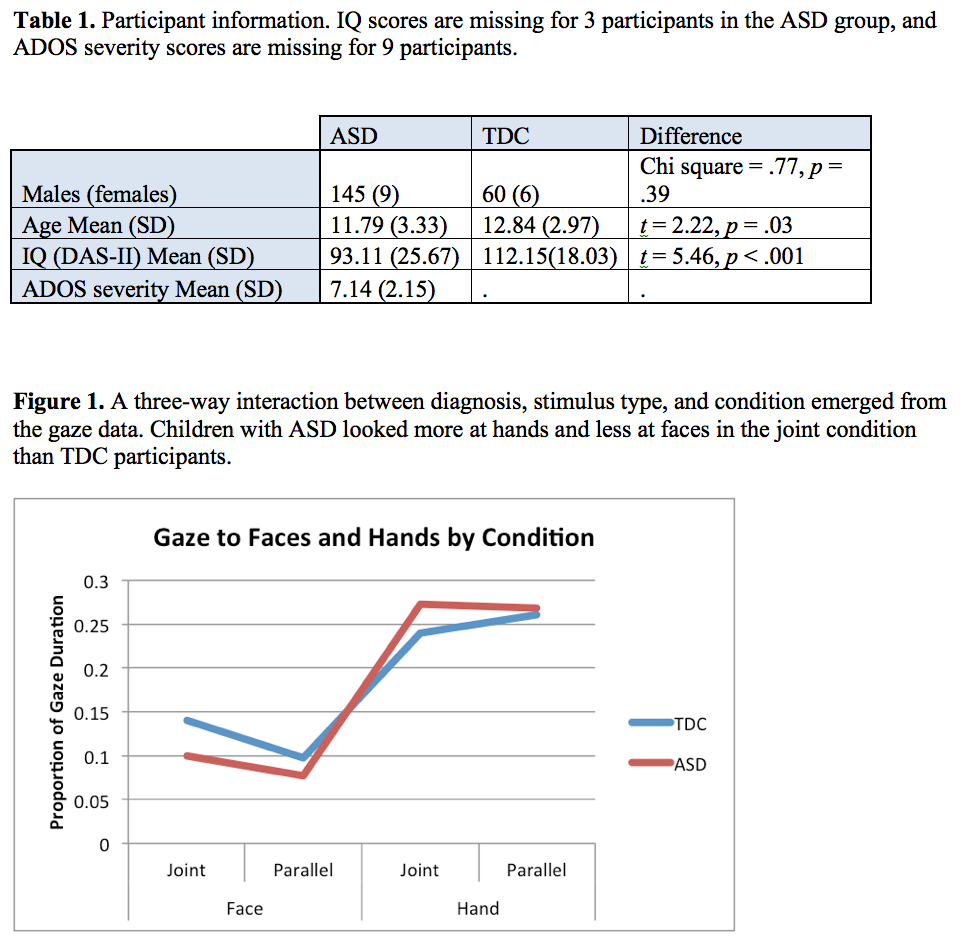