Objectives:  We studied the relationships between clusters of maternal metabolic risk factors to identify women whose metabolic dysfunction places them at greatest risk for autism and ID.

Methods:  We used a large population-based cohort of California births from 1991 to 2008 with linked information on ASD and ID diagnosis from the California Department of Developmental Services. Diabetes (type 2, gestational) and hypertensive disorders (chronic and gestational hypertension, preeclampsia, eclampsia) were identified by ICD-9-CM codes. Prepregnancy body mass index (BMI) was calculated using maternal weight and height information from birth files (available for birth years 2007 and 2008 only) and then categorized into obese (BMI ≥30), overweight (BMI 25-29.9), and healthy weight (BMI <25). Combinations of MCs were based on the presumed level of metabolic disruption, with the highest level of disruption expected for T2DM with any hypertensive disorders (HTN/PE). We conducted log-binomial regression models adjusted for birth year, maternal age, race, delivery payer, and parity to estimate risk ratios (RR) and 95% confidence intervals (CI) using the entire cohort of 1991-2008 births and a subset of 2007-2008 births with BMI data.

Results:  Women whose pregnancies were complicated by diabetes or hypertension were at highest risk for ASD relative to GP in the full cohort.  Specifically, T2DM with HTN/PE was associated with a 52% increase in risk for ASD, followed by a 40% increase for T2DM without HTN/PE, and 37% increase for GDM with HTN/PE. Similarly, in our subset of 2007-2008 births, we observed varying magnitudes of association across combinations of MCs that included BMI categories compared to healthy weight without MCs. Mothers with T2DM irrespective of other MCs were at the highest risk for ASD, followed by GDM with either HTN/PE or obesity, and then PE with obesity. We did not find significant differences in risk for autism vs. ID in children born to mothers with diabetes or hypertension in the full cohort or our subset. 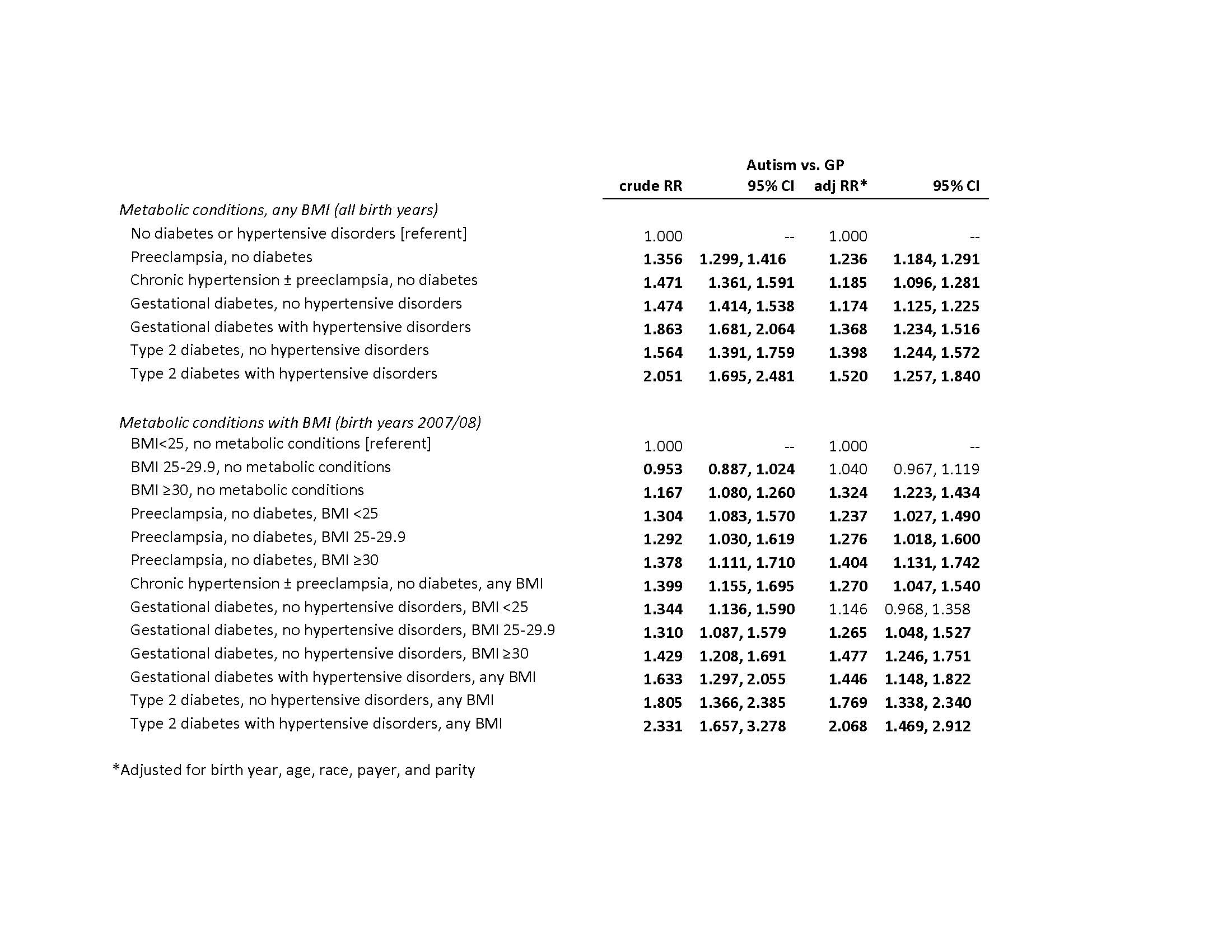