23151
Prenatal Infections and Risk of Autism, Intellectual Disability and/or Epilepsy

Objectives: In a demographically-heterogeneous population-based retrospective birth cohort, we examined the association between maternal inpatient diagnosis of infection and offspring risk of autism, ID and epilepsy. Specifically, we studied whether type of infection (by anatomic site, microbe category, fever propensity, or timing) was associated with autism, ID, or epilepsy risk.

Methods: We included births in California from 1/1/1991-12/31/2008 and limited our analysis to singletons born at gestational ages 23-43 weeks with birthweights 500-6000 grams who survived the first year of life (n=8,618,171). Infection during pregnancy was defined using ICD-9-CM codes from any maternal hospitalization; codes with fewer than 50 observations were excluded. Birth files were merged with records from the California Department of Developmental Services (DDS) for children receiving care between 1/1/1991-12/31/2012, including 42,998 with autism, 45,546 with ID, and 2,507 with epilepsy. Outcomes were defined by standardized assessments and ICD-9-CM codes, and were not mutually exclusive. Multinomial logistic regression models controlling for maternal age, race/ethnicity, educational attainment, payer, parity, and birth year – with or without gestational and pregestational forms of diabetes and hypertension – examined relative risks (RRs) and 95% confidence intervals (CIs) for pregnancies complicated by infection for offspring autism, ID, or epilepsy. Additional models using sub-categories of the predictor explored the effect of type, site, fever propensity, and timing of infection on outcomes of interest.

Results: Demographic features of mothers and children with autism resembled published data, including predilection for white race, higher maternal age and educational attainment, and lower parity. Parous women were more likely to have children with ID and/or epilepsy than their nulliparous counterparts.  Maternal infection was associated with an 8-43% increased risk for autism, ID, and/or epilepsy in adjusted analyses (Figure 1).  Effects did not differ by infection febrile potential.  Although women with metabolic conditions were more likely to have children with adverse neurodevelopmental outcomes, correlations between infection and adverse outcomes persisted when metabolic conditions were removed from statistical models.   While increased risk of ID or epilepsy was sustained across all racial and ethnic groups, increased risk for autism was seen solely among white women with infections.  Stronger associations were observed between sub-categories of infection and ID and epilepsy, including bacterial etiology (increased by 43% and 57%, respectively), and GU site (39% and 48%, respectively). Outcome risk differed by timing of infection, with second trimester infections conferring a 24% increased risk for autism and a greater than two-fold risk for ID and epilepsy, and third trimester timing elevating risk to a lesser degree.

Conclusions:  This study adds to the growing body of evidence implicating immune-mediated exposures during fetal development, particularly second trimester infections, in the etiology of autism, ID, and epilepsy.  Our findings highlight the need for targeted investigation into the mechanisms underlying these fetal exposures and immunologic responses resulting in distinct patterns of neurodevelopmental compromise. 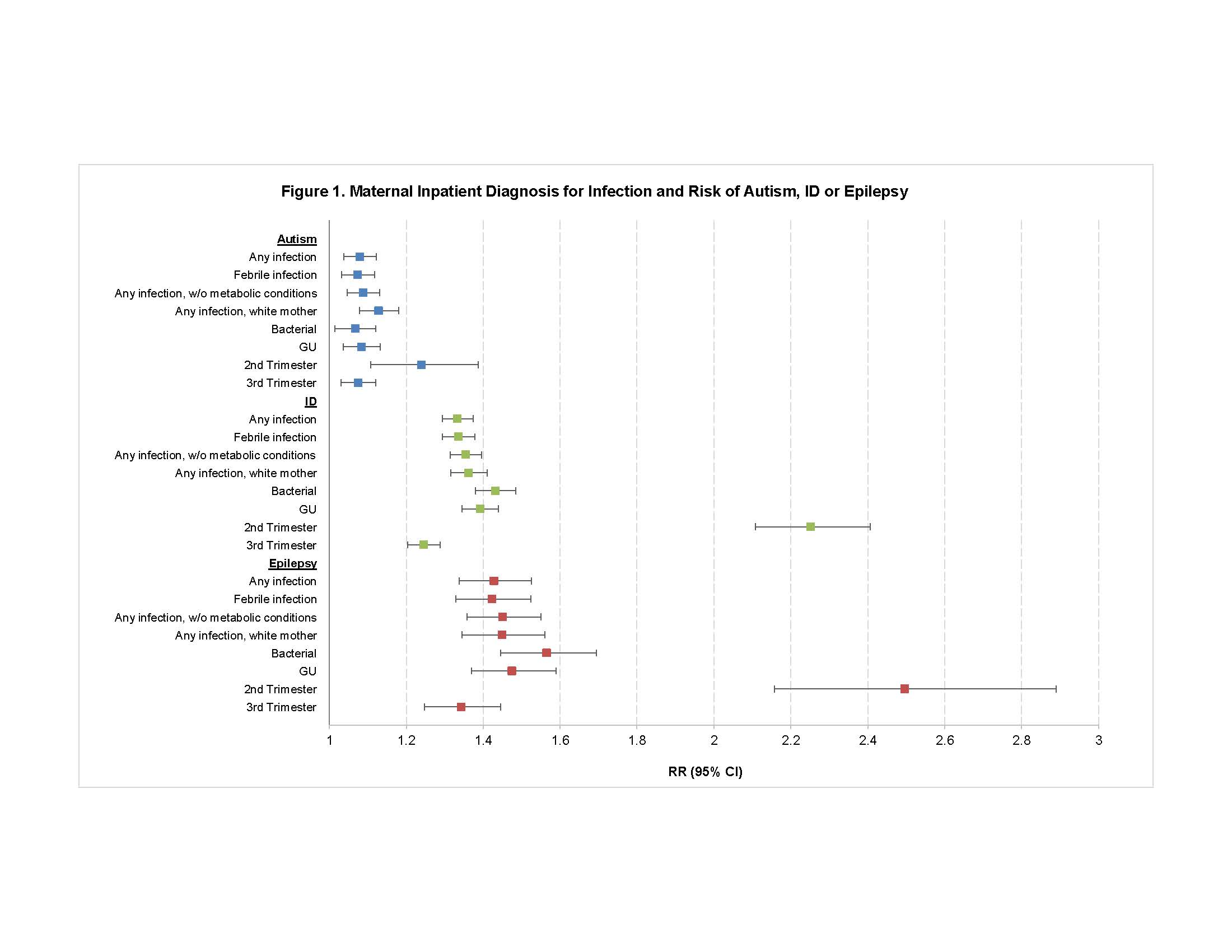