Objectives:  This study explored the variability in autism identification pathways for families with African-American children focusing on three key events: a) first concerns and help seeking, b) first autism diagnosis, and c) start of special services. We developed an interview tool using EHCI methods to enhance accuracy of parent/caregiver recall regarding their experiences seeking an ASD diagnosis and services for their child. This Diagnostic Odysseyinstrument (Shattuck et al. 2013) seeks to capture and quantify barriers to quality treatment, medical care, diagnosis of autism spectrum disorders, and service seeking experiences for African-American and minority families.

Results:  In the diagnosed group (N=275), the mean age parents reported first concerns with their child’s language, behavior or development was 21.4 months (SD=17.8), and they reported sharing concerns with a professional by a mean age of 27.1 months (SD=22.6). However, the mean age of receiving an official autism spectrum diagnosis in this group was not until 54.4 months (SD=36.3). In comparison, mean age of first concerns in the suspected ASD group (N=37) was 35.1 months (SD=26.2); mean age at the time of the research evaluation was 148.3 months (SD=75.9), with an average delay of 114.1 months (SD=75.2) between age of initial concern and identification of an ASD by research diagnosis. All parents of children suspected of having an ASD reported sharing concerns with a professional, mean age =42.0 months (SD=28.4), however only 46.0% of these children had been assessed for an ASD prior to study enrollment (mean age 91.0 months, SD=51.4). Seventy-six percent of children suspected of having an ASD diagnosis met DSM criteria based on a clinical best estimate research evaluation at the time of the study.

Conclusions: The findings of this study reveal continued concerns with delays in autism evaluations for African American children despite parents expressed concerns to professionals. This research can help us to guide interventions that may decrease the delay in diagnosis and adequate treatments for African-American children with autism spectrum disorders. 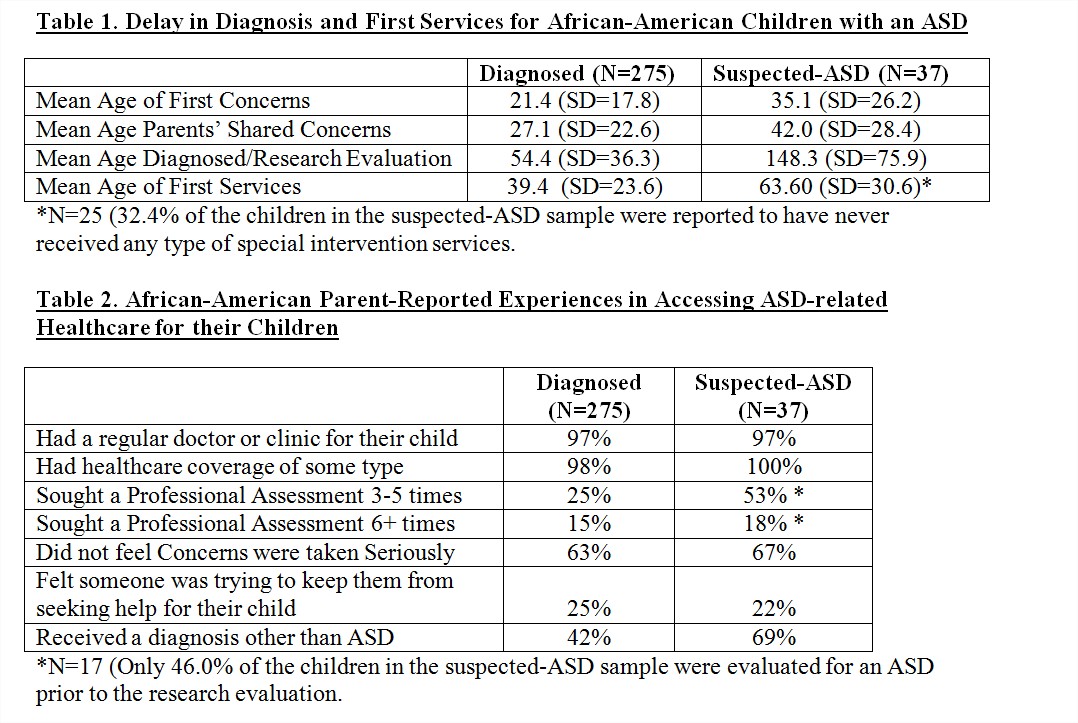