Golden Gate Ballroom (Marriott Marquis Hotel)
G. Liu1, A. Pearl2, K. Moyer1, L. Kong1, D. Leslie1 and M. Murray1, (1)Penn State College of Medicine, Hershey, PA, (2)Penn State Milton S. Hershey Medical Center, Penn State College of Medicine, Hummesltown, PA
Background: The prevalence of ASD began to increase dramatically about a decade ago, and now the first wave of these children has approached adolescence and early adulthood. While early diagnosis and intervention have been the focus of the scientific and clinical communities, the population of adolescents with ASD has not received the same attention. Although various ASD-related healthcare services have been designed to better serve this population, it is relatively unknown how well they are being served.

Objectives:  In this study, we use a large, national healthcare claims database to compare the healthcare utilization history (in-/out-patient medical records) of adolescents with and without ASD, with a focus on hospitalization due to emergency department visits. The goal of this study is to provide an assessment on patterns of hospitalizations subsequent to ED visits as an indicator of the physical and mental health well-being of adolescents with ASD.

Methods:  Using the 2005-2013 MarketScan® Commercial Claims and Encounters database, we identified cohorts of patients who had at least one ED visit during any of those years. We constructed a sub-cohort of children with at least two separate diagnoses of ASD (ICD 9 codes 299.0x and 299.8x) and a sub-cohort of children without ASD. We also broke down the entire cohort into annual cohorts. In each of the annual cohorts as well as in the combined cohort, we described the proportion of patients whose ED visits resulted in subsequent hospitalizations. We also compared the hospital length of stay among ASD vs. non-ASD patients. 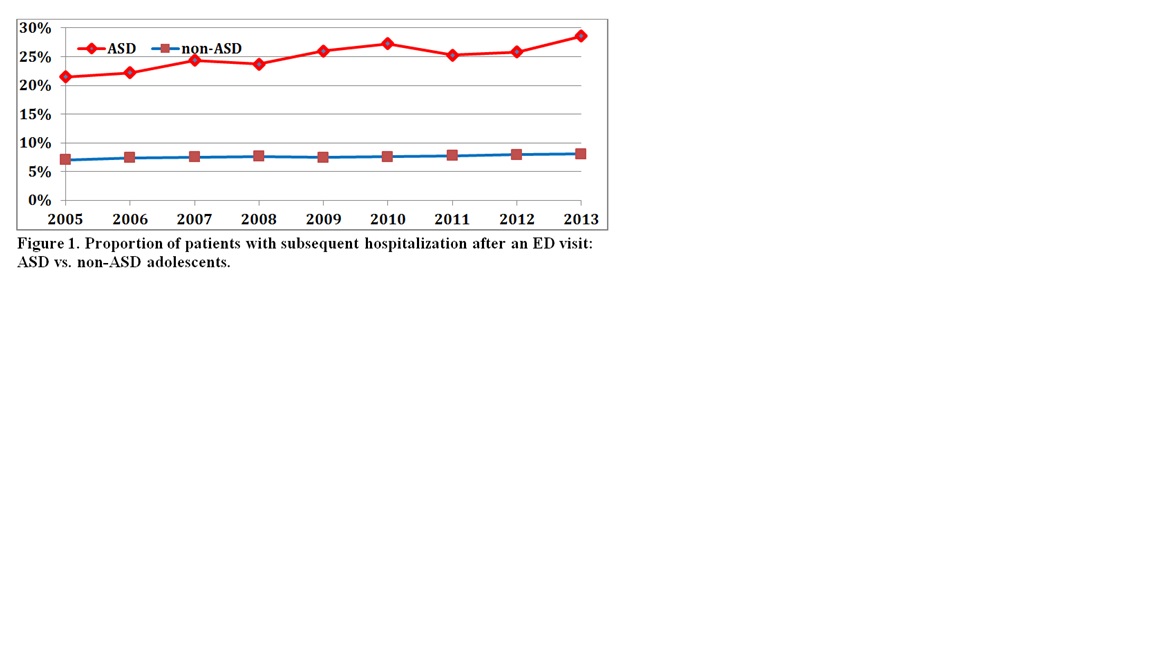