Objectives:  In this study, we use a large, national healthcare claims database to examine emergency department utilization over nine years (2005 – 2013) in children aged 6 to 12 years with ASD. The goal of this study is to provide an assessment of ED visits as an indicator of the physical and mental health well-being of children with ASD as well as the healthcare service for them.

Methods:  Using the 2005-2013 MarketScan® Commercial Claims and Encounters database, we identified cohorts of children aged 6-12 who had at least one ED visit during any of those years. We constructed a sub-cohort of children with at least two separate diagnoses of ASD (ICD 9 codes 299.0x and 299.8x) and a sub-cohort of children without ASD. We also broke down the entire cohort into annual cohorts. In each of the annual cohorts as well as in the combined cohort, we described the proportion of patients who visited the ED.

Results:  As Figure 1 shows, through the last decade, ED visits among children aged 6-12 with ASD have remained steady with no apparent increase, although slightly higher than non-ASD children of the same age. This was in dramatic contrast to a previous study that showed steady increases in ED visits among adolescents aged 12-21. As shown in Figure 2, we also observed a slight increase in behavioral health-related ED visits among children with ASD, with almost 20% of ED visits being for a behavioral health issue in the most recent years. Multi-variable regression showed that, after adjusting for confounders such as age, gender, census region and type of health insurance plan, children with ASD were 50% more likely to have ED visits compared to children without ASD (adjusted odds ratio [aOR] 1.579, confidence interval [CI] 1.550-1.609). Among other confounders, sex also was significant associated with ED visits, with boys more likely to have ED visits than girls (OR: 1.214, CI: 1.209-1.219).

Conclusions:  Our study revealed that the rate of ED visits among children aged 6-12 with ASD was fairly flat between 2005 and 2013, and was only slightly higher than the rate among children without ASD in the same age bracket. On the other hand, we observed a steady increase in ED visits primarily associated with behavioral health conditions, suggesting an ASD-related mental health crisis. 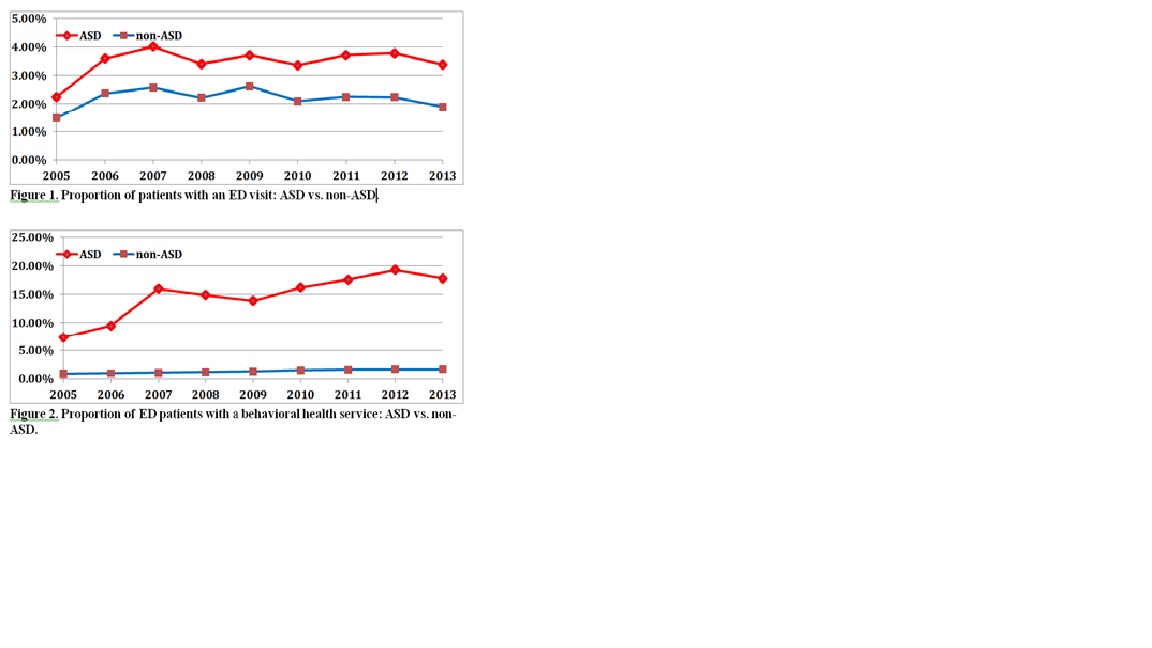