Room 308 (Baltimore Convention Center)
I. Giserman Kiss, F. Martinez-Pedraza and A. S. Carter, Department of Psychology, University of Massachusetts Boston, Boston, MA
Background: Retrospective and prospective studies confirm that symptoms of ASD emerge during the first two years of life (Ozonoff et al., 2011). Yet, the national average age of diagnosis is above 36 months (CDC, 2012), with a greater delay for children from minority backgrounds, non-native English speaking families, and low socioeconomic statuses (Valicenti-McDermott et al., 2012). With increasing evidence that early intervention (EI) significantly improves outcomes for children with ASD, early detection and diagnosis is critically needed (Seida et al., 2009). The AAP and CDC recommend administering developmental screeners at routine visits; universal screening can potentially ameliorate health disparities regarding age of diagnosis. The Brief Infant Toddler Social Emotional Assessment (BITSEA) (Briggs-Gowan & Carter, 2006) is a screening tool designed to identify toddlers with social-emotional/behavioral problems and/or delays/deficits in social-emotional competencies. Eighteen of the 42 items on the BITSEA reflect behaviors consistent with ASD symptoms. In previous work, we determined that the BITSEA ASD scales were highly effective in identifying children with ASD in a sample of 436 toddlers (mean age: 29 months), with sensitivity, specificity, and PPV rates all over 80% for the optimal cut-point.

Objectives: The goals of this study included: determining how the BITSEA functioned in a younger sample of toddlers with diverse backgrounds, and exploring possible health disparities in the utility of the screening instrument.

Methods:  Data are presented on a diverse sample of 276 toddlers (mean age: 25 months, 55% male, 41% diagnosed with ASD) enrolled in EI services. 53% of toddlers were from historically underserved racial/ethnic minority backgrounds (21% Black/African American, 22% Latino/Hispanic, 4% Asian, and 6% multiracial) and 33% of toddlers came from families with a primary language other than English (16% Spanish, 17% other). Caregivers completed the BITSEA in either English or Spanish. Analyses examined the following subscales: ASD-Problem (including nine items focused on ASD negative symptoms), ASD-Competence (including nine items focused on ASD positive symptoms), and ASD-Total (sum of the ASD-Problem and reverse-scored ASD-Competence subscales).

Results:  ROC plots were developed for the BITSEA ASD subscales for the entire sample (see attached figure). The ASD-Total subscale with a cut-point of -9.5 was determined as the most effective for identifying children with ASD and demonstrated 93% sensitivity and 82% specificity. To explore health disparities in the utility of the screening instrument, we ran the same analyses for the participants with primary languages other than English (see attached figure), and found comparable results; a cut-point of -9.5 on the ASD-Total subscale yielded 93% sensitivity and 79% specificity in this subsample.

Conclusions:  The BITSEA ASD-Total scale appears to be an effective screening measure for ASD in young children from diverse backgrounds. Moreover, the scale was equally effective for children from English and non-English speaking families. These findings suggest universal BITSEA screening in EI could reduce the significant health disparity in age of first diagnosis. Challenges and successes in screening diverse populations will be presented in conjunction in a separate presentation in this panel. 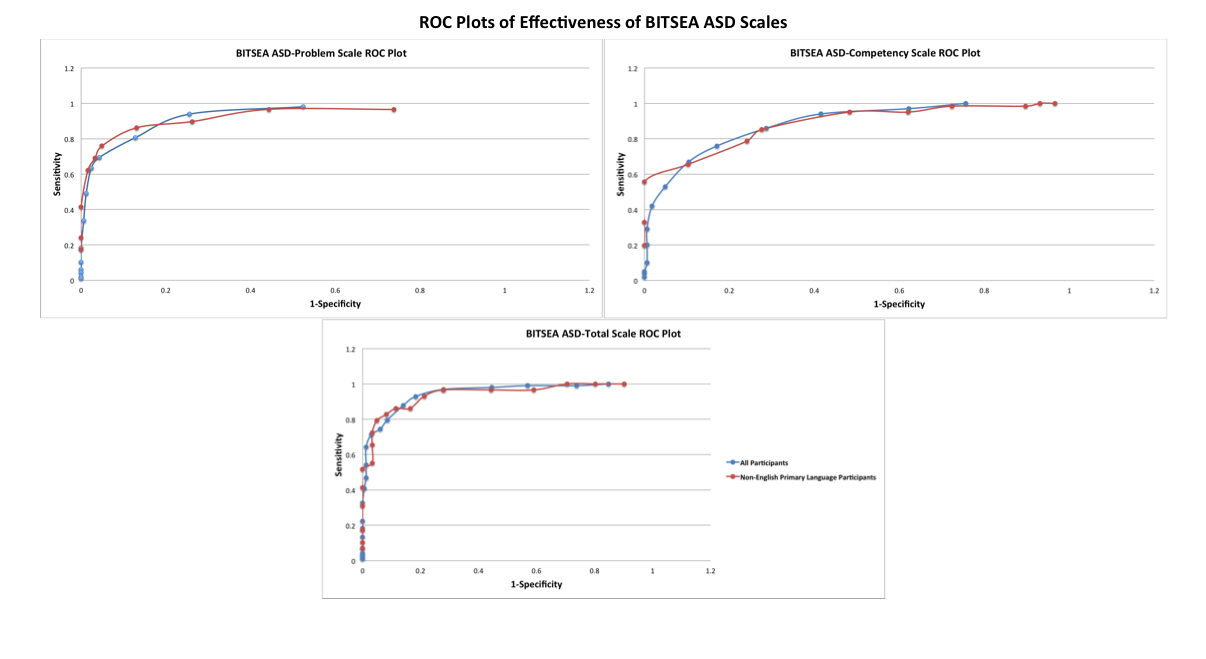