21301
The Relationship Between Intolerance of Uncertainty, Core ASD Deficits, and Anxiety

Room 310 (Baltimore Convention Center)
N. L. Kreiser1, A. Keefer1,2, V. Singh1, S. H. Mostofsky3 and R. A. Vasa1, (1)Kennedy Krieger Institute, Baltimore, MD, (2)School of Medicine, Johns Hopkins University, Baltimore, MD, (3)Johns Hopkins School of Medicine, Baltimore, MD
Background:  Intolerance of uncertainty (IU) is a dispositional trait involving maladaptive responding under conditions of uncertainty that has been linked to anxiety in typically developing (TD) individuals. Recently, there has been interest in examining how IU relates to ASD given high levels of anxiety and difficulty tolerating uncertain situations in this population. Several studies have examined the construct of IU in ASD. The findings indicate higher levels of IU and a positive relationship between anxiety and IU (Boulter et al., 2014; Chamberlain et al., 2013; Wigham et al., 2014). No studies to date have examined whether IU is exclusively a feature of anxiety in ASD or whether it is related to ASD characteristics irrespective of anxiety.

Objectives:  The objectives of this study were to: 1) Replicate the finding of higher IU levels in youth with ASD compared to TD children (Aim 1), 2) Confirm the relationship between IU and anxiety (Aim 2), and 3) Examine whether IU was associated with core and related ASD characteristics (i.e., repetitive behaviors, executive dysfunction) when controlling for anxiety (Aim 3).

Methods:  Fifty-seven children with ASD and 32 TD control participants (IQ > 80), ages 7- 16 years, participated in this study. Participants were a subset of a larger community sample of youth with ASD who were recruited for behavioral and neuroimaging research. ASD diagnosis was established by clinical evaluation and supported by the ADOS. Participants also completed measures of IU (Intolerance of Uncertainty Scale: IUSC), anxiety (SCARED), ASD behaviors (SRS), repetitive behaviors (RBS-R), and executive functioning (EF) (BRIEF). Due to a skewed distribution, non-parametric tests were utilized for all analyses. Aims 1 and 2 were pursued using Wilcoxon Mann-Whitney U tests and Spearman’s Rho correlations. Aim 3 was examined using hierarchal linear regressions with bootstrapping.

Results:  Children with ASD had significantly higher parent (z = -5.04, p < .001) and child (z = -3.69, p < .001) reports of IU compared to the TD group (Aim 1). For the ASD group, significant relationships between IU and anxiety were present based upon parent (r = .37, p = 01) and child (r = .50, p < .001) report (Aim 2). Regressions using both parent and child report showed that ASD diagnosis was associated with IU over and above the effects of anxiety (Table 1). Similarly, the relationship between IU and SRS, when controlling for anxiety, approached significance (p = .07). Neither repetitive behaviors nor EF difficulties were associated with IU when controlling for anxiety.

Conclusions: Findings from this study confirm that IU is elevated in youth with ASD and is associated with anxiety. The novel finding of this study is that core ASD deficits were related to IU in this study beyond the contributions of anxiety. This raises questions about whether IU might be an inherent or heritable feature of ASD or related to a unique presentation of anxiety in ASD. Heritability and longitudinal studies of IU as well as research with clinically anxious ASD samples are necessary to better understand these relationships. 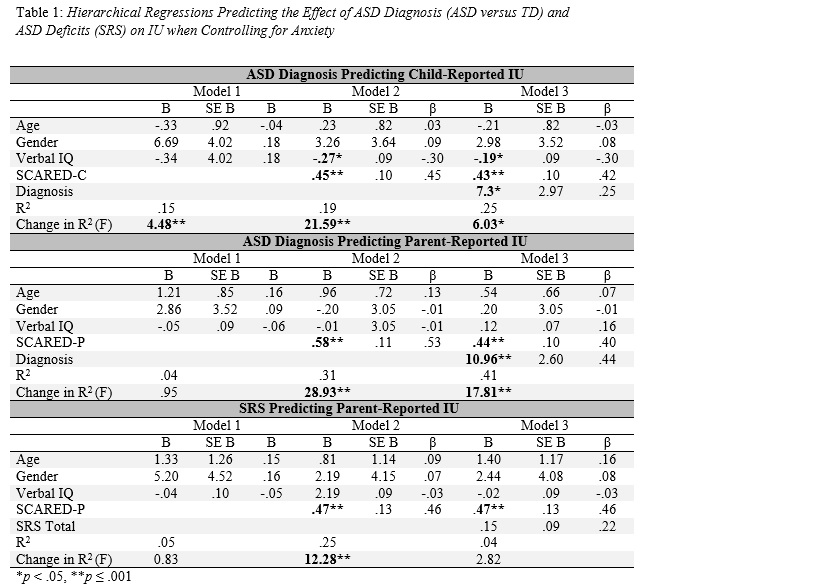 See more of: Efforts Towards a More Cohesive Understanding of Anxiety in ASD: Correlates and Underlying Mechanisms
See more of: Medical and Psychiatric Comorbidity