Objectives:   The objective of the current study is to explore what family, child, and parent factors may function as moderators of the effects of participation in the Adapted Responsive Teaching (ART) intervention.

Methods:   ART is a parent-mediated early intervention program designed to facilitate the development of children at risk for ASD by improving parental responsiveness. Eighty-seven infants, screened by the First Year Inventory (FYI) at 12-months of age as at risk for ASD, participated with their families in a RCT efficacy study. They were randomized to either the ART group or the control group (referral to early intervention and monitoring, REIM group). Based on their gains in standard scores on the Communication and Symbolic Behavior Scales Behavior Sample (CSBS-B; Wetherby & Prizant, 2002), two children in each group who had made the most progress were identified as responders (in the ART group) or developers (in the REIM group); two who had the poorest outcomes were identified as non-responders or non-developers. A multiple case study method was employed to explore the similarities and differences in children, parent and family characteristics between responders and non-responders and to generate a profile for responders.

Results:   The responders to the ART intervention showed few early markers of ASD (based on the AOSI), low formal language skills but average social-communication skills, and typical sensory processing patterns, while the two non-responders had more uneven profiles of developmental/adaptive skills, somewhat more autism markers, and atypical sensory processing patterns. Both responders received speech-language therapy in addition to ART. Sensory patterns, autism symptoms, and the community service they received may have influenced the children’s response to ART. Moreover, both the responders came from families with higher income and fewer children at home compared to non-responders, and mothers (primary caregivers) of responders had higher education levels. Mothers of the ART responders showed high initial responsiveness, higher level of consistency and fidelity in implementing ART at home than mothers of non-responders, and little change in responsiveness but increases in directiveness when interacting with their children over the course of the study. There was no clear pattern for developers or non-developers in the REIM group. Additional cases (n = 26) meeting pre-established criteria of 95% confidence interval for responders (n=9) /non-responders (n=5) and developers(n=9) /non-developers (n=3) will be analyzed to examine the generalizability of the current findings.

Conclusions:   The current findings address the potential importance of both child and parent factors in influencing the effectiveness of ART and similar interventions, and thus, suggest that researchers and practitioners need to focus on tailoring intervention strategies to be more family-centered and individualized. 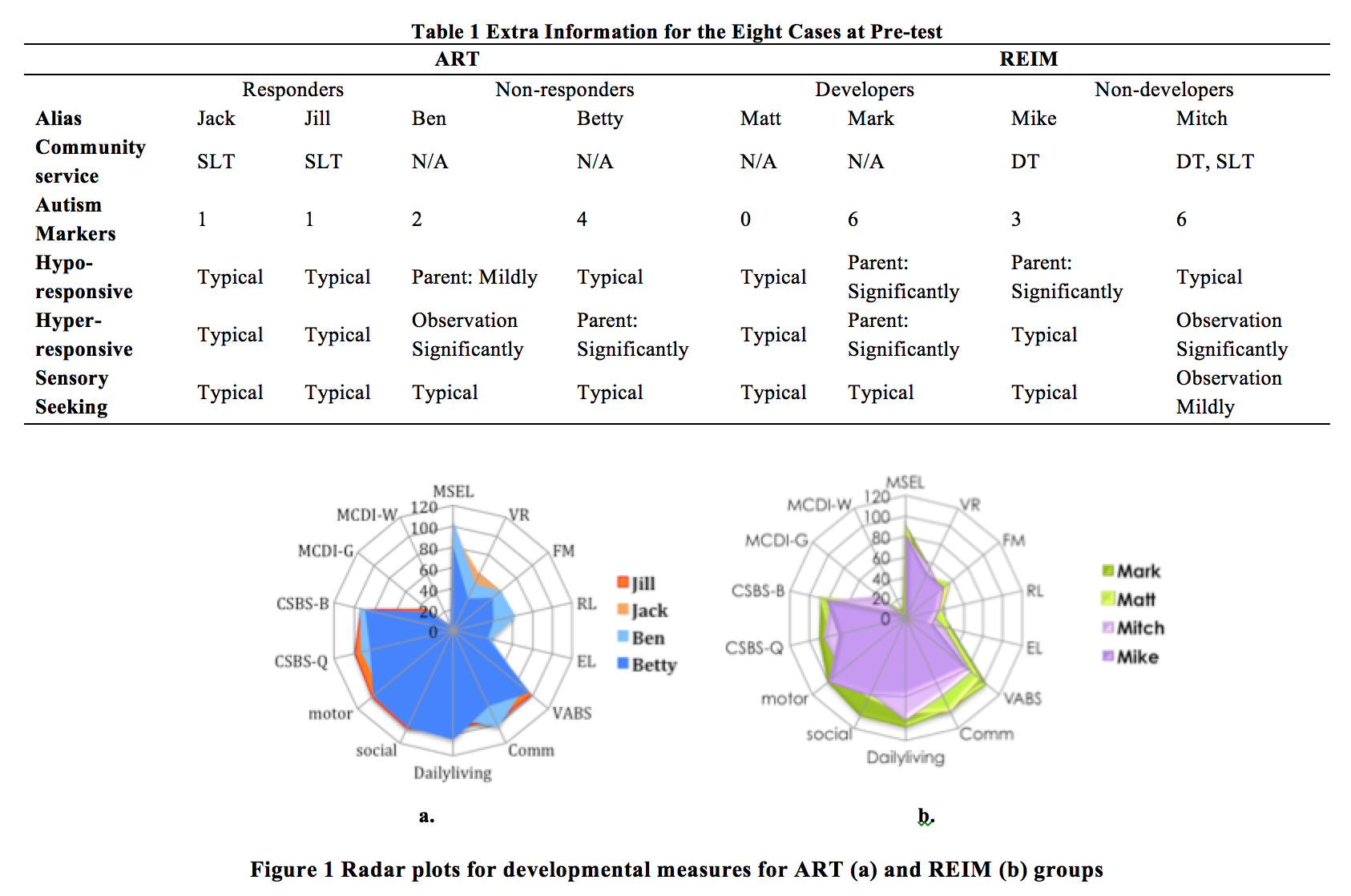