Hall A (Baltimore Convention Center)
J. M. Paynter1 and A. E. Lane2, (1)AEIOU for Children with Autism, Moorooka, Australia, (2)University of Newcastle, Callaghan, Australia
Background: High quality early intervention has been observed to improve outcomes at a group level for children with autism spectrum disorder (ASD) (e.g., Magiati et al., 2012; Warren et al., 2011). However, wide individual variation in response to intervention is also reported (e.g., Kamio et al., 2015). Emerging research suggests subgroups of children with ASD may exist in terms of response to intervention (Szatmari et al., 2015; Stevens et al., 2009). This research is valuable as it may lead to identification of what pre-treatment characteristics predict response to specific interventions, as well as those who may need additional support. The focus of this study is on a Naturalistic Developmental Behavioural Intervention (NDBI; see Schreibman et al., 2015) developed in Queensland, Australia. The program draws from a blend of behavioural and developmental strategies within a centre-based group program and has recently been manualised. Promising outcomes in terms of cognition, language, adaptive behaviour, and ASD symptoms have been found (Paynter et al., 2012; Paynter et al., 2015). However, this included significant variation at the individual level.

Objectives: The aims of this study were to examine (1) subgroups based on response to NDBI intervention; (2) characteristics of subgroups; and (3) intake variables that best predict outcomes.

Results: Consistent with previous research, significant improvements in cognitive and adaptive behaviour scores between intake and exit were found for the whole group overall. Model-based cluster analysis identified a four-factor solution based on changes in age-equivalent scores on the VABS-II and MSEL. The majority (96%) of participants fitted into two clusters: a low outcome group (n = 200) with significantly lower change scores across all domains; and a high-outcome group (n = 81). At baseline, the high outcome group reportedly showed fewer autism symptoms, but were similar in age. Greater differences in groups were seen in verbal and non-verbal cognitive skills, as well as adaptive behaviour. The high outcome group’s adaptive behaviour composite was above 70 on average, whereas, the low outcome group was below.

Conclusions: Two distinct clusters were identified with a low-outcome group showing scores on average in line with an intellectual disability, consistent with previous research across a range of interventions grouped together (Szatmari et al., 2015). Different or more intensive interventions may be needed for this group. Intake variables, particularly cognitive and adaptive behaviour skills may provide predictors of response to intervention. There is need for further research to extend this research to explore subgroups on response to intervention across different programs to provide a foundation to inform intervention choice for specific child profiles. 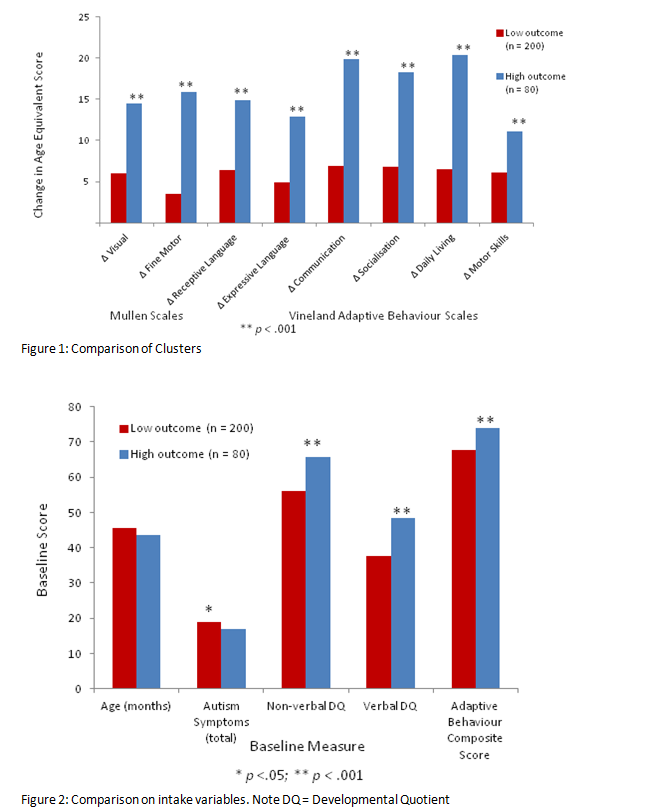