Objectives: To apply computer vision technology to precisely characterize presence and timing of orienting to name in 16-30 month olds with and without risk for ASD.

Methods: Interim analyses were conducted on 14 toddlers who met criteria for ASD on the ADOS-T and 14 age and gender-matched children with typical development who participated in an experimental assessment. Children watched videos on an iPad while an examiner standing behind the child administered 3 opportunities for the child to orient to their name. The front-facing camera within the iPad recorded video. Orienting to name was assessed using algorithms to detect movement of facial landmarks toward the examiner. Automated scoring was compared to rating by a human coder. Precise measurement of initiation of head movement (sampling rate: 30 frames/sec) allowed for analysis of latency to response. Frequencies of orienting and Kaplan-Meier curves were derived to compare the two groups of toddlers.

Results: Computer vision analysis of orienting showed moderate reliability with human rating and excellent agreement on timing of head turn (kappa= 0.52, ICC=.80). On the first name call, 71% of the typically-developing toddlers oriented to name, whereas only 36% of toddlers with ASD oriented. In the typical group, mean latency to orienting on the first name call was 0.83 seconds (sd 0.68), whereas mean latency in the ASD group was 1.53 seconds (sd 1.17). Kaplan-Meier curves were found to be statistically different on log-rank test (p=0.04; hazard ratio 3.03; 95% CI [1.02,9.02]) (Figure 1).

Conclusions: We demonstrated that typically-developing toddlers tend to orient to their name within 1 second, whereas toddlers with ASD orient inconsistently and with longer latency. Computer vision analysis allowed for automated and precise characterization of the social orienting response in toddlers. Development of computerized behavioral assessments of autism risk behaviors may aid in developing automated, scalable methods of early detection of ASD. Future analyses will be conducted with a larger sample in this ongoing study. 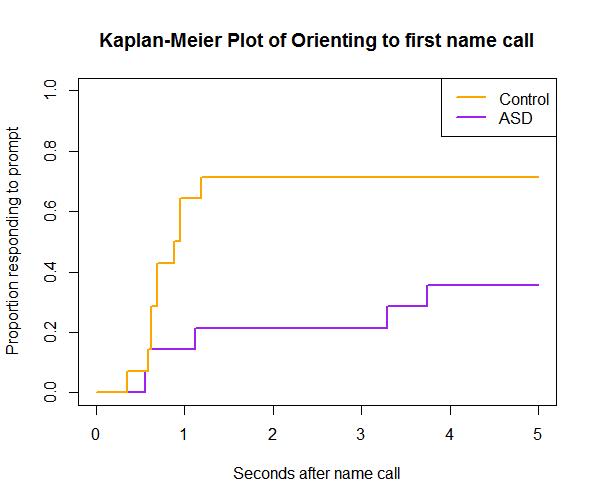