The current study intends to fill a gap in empirical data on adaptive behavior skills in a diverse sample of children with ASD with monolingual and bilingual language experience.

Clinical records for children with ASD between 3 and 12 years of age were reviewed from a developmental disabilities clinic located in a large diverse city in the United States.  Data was extracted from the clinical record including demographics, language experiences, and scores for the Vineland Adaptive Behavior Scales and nonverbal IQ.  Children were eligible for inclusion if they were verbal and had a nonverbal IQ score greater than 70.  Children’s language status was determined by review of clinician observations, parent-report of language use in the home/school, and language use reported in IEP reports.  The preliminary sample included 57 children, with a mean age of 6.20 years.  The monolingual group included 15 children (53% White, 47% African-American; 100% male) and the bilingual group included 42 children (100% Latino; 93% male, 7% female).

Preliminary analyses demonstrated that the bilingual group was older than the monolingual group and no differences were found in nonverbal IQ between groups.  A MANOVA was then conducted on the standard scores for the Communication, Daily Living Skills, and Socialization subscales of the Vineland across child language groups, with age as a covariate.  These analyses found that parent-reported communication skills did not differ between monolingual and bilingual children with ASD, F(1, 54) = 1.30, p = .260.  Analyses also showed that bilingual children with ASD had more intact daily living skills, F(1, 54) = 6.80, p = .012, partial η2 = .11, and more intact socialization skills, F(1, 54) = 5.97, p = .018, partial η2 = .10, than monolingual children with ASD. 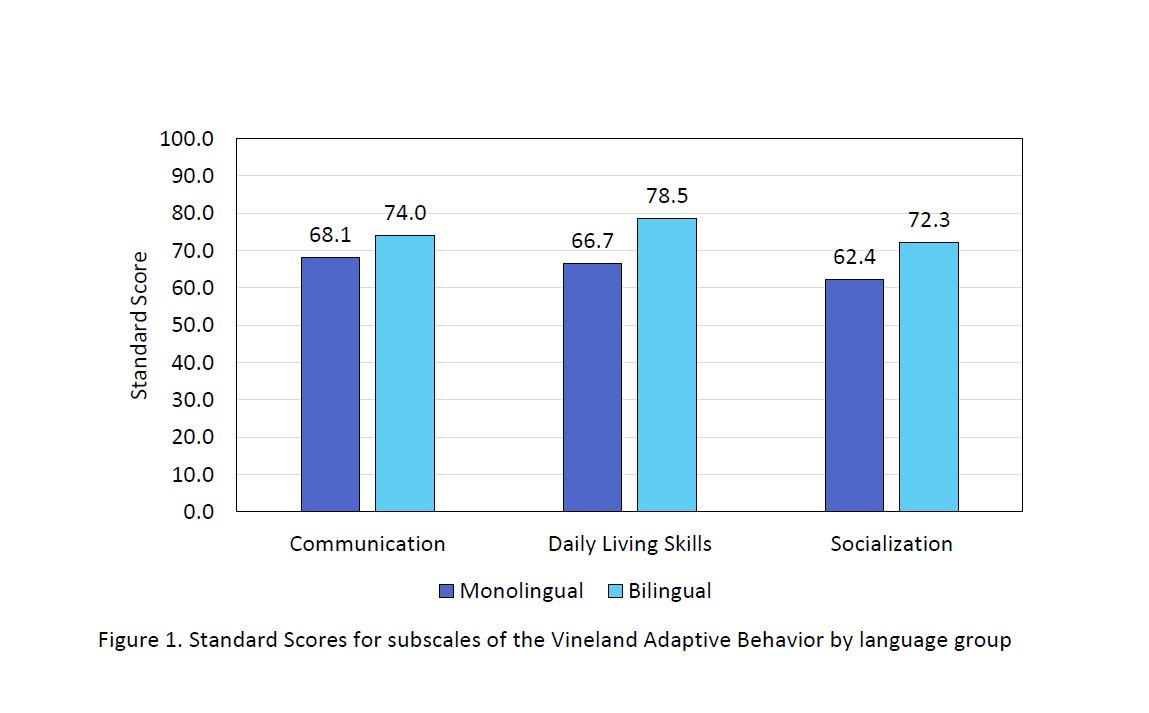