Objectives:  We develop a novel probabilistic framework to extract both hyper- and hypo-synchronous functional communities from task fMRI data. Our approach differs from prior literature in three ways. First, we propose a unified Bayesian model that describes the relationship between population templates and individual subject observations. Second, we perform community detection in the space of group-level functional differences, which allows us to identify both heighted and reduced synchrony. Finally, we use a clustering framework to simultaneously detect multiple abnormal communities of varying type.

Methods:  Our model assumes that the altered whole-brain functional synchrony associated with autism can be explained by K non-overlapping communities. Each community is associated with a binary label that indicates either a hyper- or hypo-synchronous subgraph. We use multinomial variables to represent the latent functional synchrony within each population. Empirically, we find that three states (low, medium and high) best capture the dynamic range and variability in our fMRI dataset. The fMRI metrics are modeled as noisy Gaussian observations of the underlying latent structure. We apply our model to an fMRI study of social perception in autism. The dataset consists of 72 high-functioning autistic children and 43 age-matched (p > 0.124) and IQ-matched (p > 0.122) neurotypical controls. The experimental paradigm features coherent and scrambled point-light animations. The coherent biological motion depicts a point-light figure performing movements relevant to early childhood experiences, and the scrambled animations combine random trajectories from the coherent displays.

Results:  Our model identifies a hyper-synchronous community that concentrates in the left superior temporal sulcus, the visual cortex and the somatosensory cortex. Concurrently, we detect a hypo-synchronous community that localizes to the bilateral ventral prefrontal cortex, insula, posterior cingulate, caudate and amygdala. The corresponding network diagram reveals increased synchrony between temporal and occipital nodes and reduced synchrony between the frontal and parietal nodes. Consistent with neurocognitive findings, these results suggest hyper-functionality in a visual perception network; individuals with autism tend to outperform their neurotypical peers in such tasks. In contrast, the hypo-synchronous circuits include regions that are well known for their role in social cognition and the high-level interpretation of social stimuli. A comparison with the Neurosynth meta-analytic database (www.neurosynth.org) also exposes a clear functional distinction between the two communities.

Conclusions:  Our novel Bayesian framework for fMRI community detection in autism retrieves key networks associated with autism. Unlike prior methods, we explicitly model multivariate differences in the global functional organization of the brain. Subsequent decoding via Neurosynth confirms the clinical validity of our results within the neuroimaging literature. 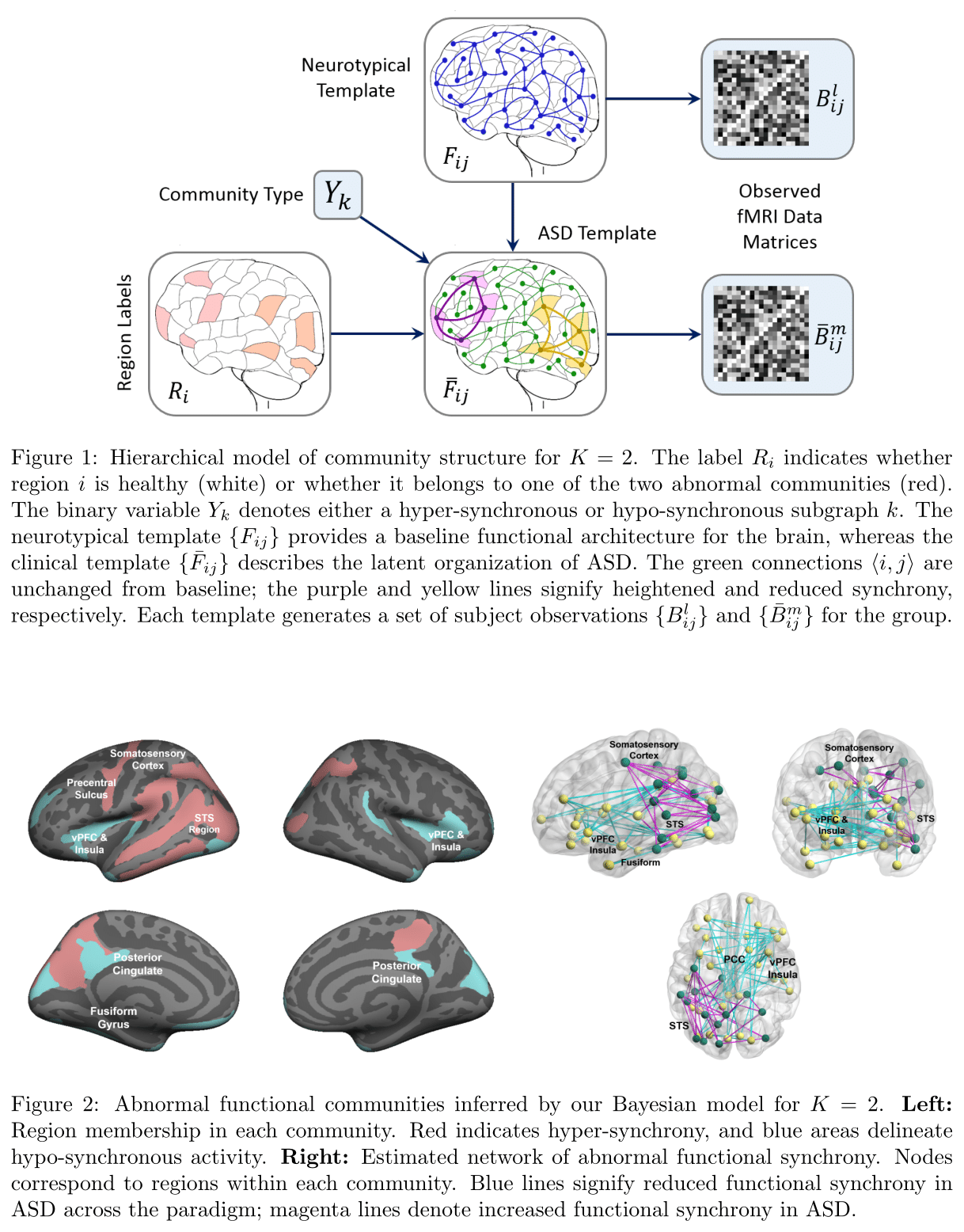