Hall A (Baltimore Convention Center)
D. Dixon1 and E. J. Linstead2, (1)Center for Autism and Related Disorders, Tarzana, CA, (2)Chapman University, Lakewood, CA
Background:   Autism spectrum disorder (ASD) is a heterogeneous disorder. Presentation and severity of symptoms as well as response to treatment vary widely among individuals with ASD. Because of the heterogeneous nature of ASD, individualization of treatment is critical to treatment success. In recent years, the scale and ease at which fine-grained behavioral data can be collected has grown dramatically, providing new avenues of research in predictive analytics for behavioral treatment of ASD. Behavioral phenotyping of ASD is one such avenue that may advance targeted treatment methods, improving treatment efficacy.

Objectives:   The purpose of the present study was to identify whether distinct behavioral phenotypes could be defined in a large geographically diverse sample of children with ASD receiving community-based behavioral intervention services.

Methods:   A high-dimensional cluster model of ASD was built for 1,619 patients with confirmed diagnoses. Nonparametric techniques were used to statistically determine latent group structure among the population based on responses to a standardized comprehensive assessment of developmental functioning. Unsupervised machine learning methods were utilized to infer cluster membership assignments. Both the classic K-means clustering algorithms with hard cluster assignment output, as well as a more sophisticated Gaussian mixture model based on expectation maximization were considered. The latter provided a probabilistic framework on which to measure and differentiate clusters.

Results:   Results of this study statistically detected the existence of distinguishable subgroups of ASD. Each of these subgroups displayed distinct deficits across developmental domains, including academic, adaptive, cognition, executive functioning, language, motor, play, and social skills. While memberships were significant and statistically distinct for all subgroups, some subgroups displayed clearly unique patterns of deficits while other subgroups showed marked similarities. Profiles for like subgroups suggested a hierarchical relationship, revealing high, moderate, and low levels of functioning for a single composition of deficits.

Conclusions:   Findings indicate the existence of distinct behavioral phenotypes within a large sample of children with ASD. It is encouraging that such distinctions were be made using the results of a standardized assessment that can be easily administered. Future research should investigate whether these phenotypes display measurable differences in treatment response. These profiles serve as preliminary templates upon which targeted behavioral treatment programs may be built. The significance of these phenotypes may span beyond behavioral treatment. Further exploration of other distinctions between these groups (e.g., genetic, medical, environmental, etc.) are warranted. 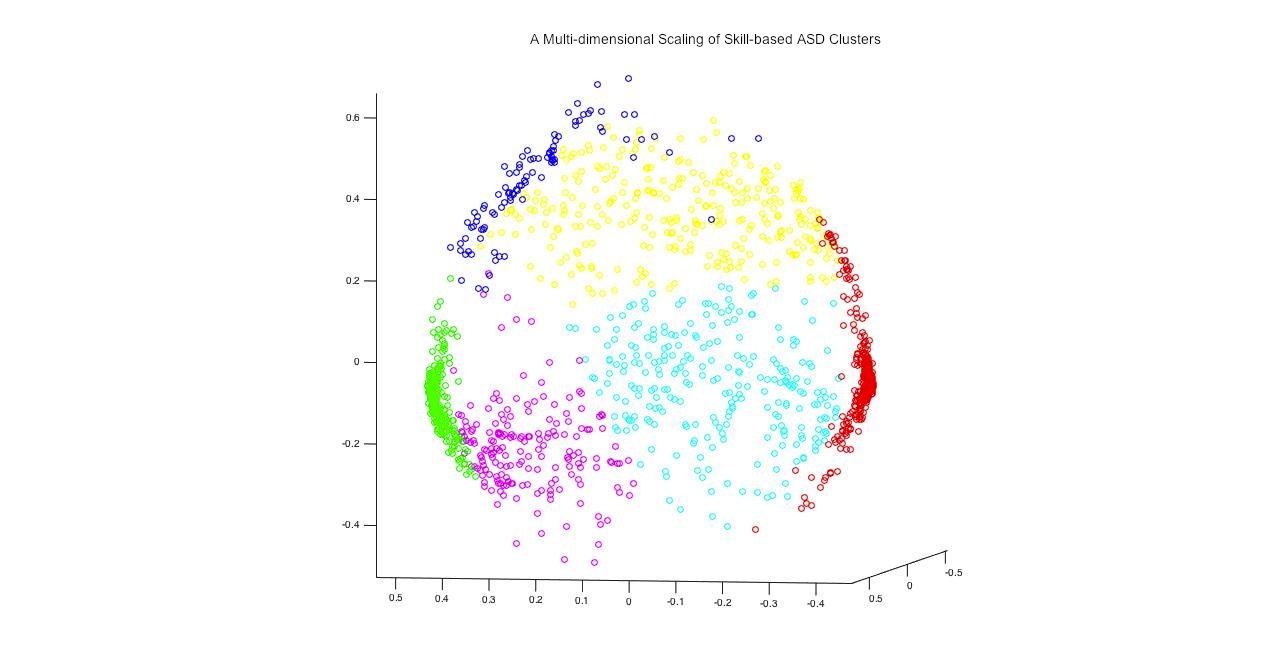