Hall A (Baltimore Convention Center)
L. B. Swineford1,2 and A. Thurm2, (1)Department of Speech and Hearing Sciences, Washington State University, Spokane, WA, (2)Pediatrics and Developmental Neuroscience Branch, National Institute of Mental Health, Bethesda, MD
Background: Calibrated severity scores (CSS, also termed comparison scores) have been developed for the Autism Diagnostic Observation Schedule, second edition (ADOS-2) and the two diagnostic domains, Social Affect (SA) and Restricted and Repetitive Behaviors (RRB) (Gotham et al., 2009; Hus, Gotham, & Lord, 2014). These scores are published for modules 1-3 of the ADOS-2 in an attempt to provide a metric of ASD severity not conflated by cognitive and language abilities. With the recent addition of the toddler module (ADOS-T), there is now a version of the ADOS available for children between 12 and 30 months of age. Sensitivity, specificity, and predictive value of raw ADOS-T scores support the use of the ADOS-T in early diagnostic practices (Luyster et al., 2009; Guthrie et al., 2013). However, the ADOS-T is still new compared to the other ADOS modules. The recent publication of the ADOS-T CSS scores (Esler et al. 2015) highlights the need for further examination of its utility using independent samples.

Objectives: The aim of the present study was to examine the utility of the CSS scores for the ADOS-T in an independent sample of children with ASD, non-ASD delays, or typical development.

Methods: Participants included 116 toddlers (mean age: 21.44 months; range 12.60-29.76 months) who screened for autism research in the Pediatrics and Developmental Neuroscience Branch of the National Institute of Mental Health. Of the 116 toddlers, 21 met criteria for ASD, 37 for non-ASD delays, and 58 for typical development. All participants received the ADOS-T and the Mullen Scales of Early Learning as part of the screening evaluation.

Conclusions: This study provides further support for the use of the clinical concern ranges on the ADOS-T. Further, results suggest that the CSS and even raw scores of the ADOS-T are an independent metric of ASD symptom severity, as the raw scores were also not related to measures of language and cognitive ability. These findings contrast the original ADOS-T CSS publication which suggested the raw and CSS scores (less so for the latter) were influenced by language abilities. Overall, while longitudinal studies need to compare CSS scores from the ADOS-T to other modules, the ADOS-T CSS scores will be useful in allowing for comparison of ASD symptoms over time. 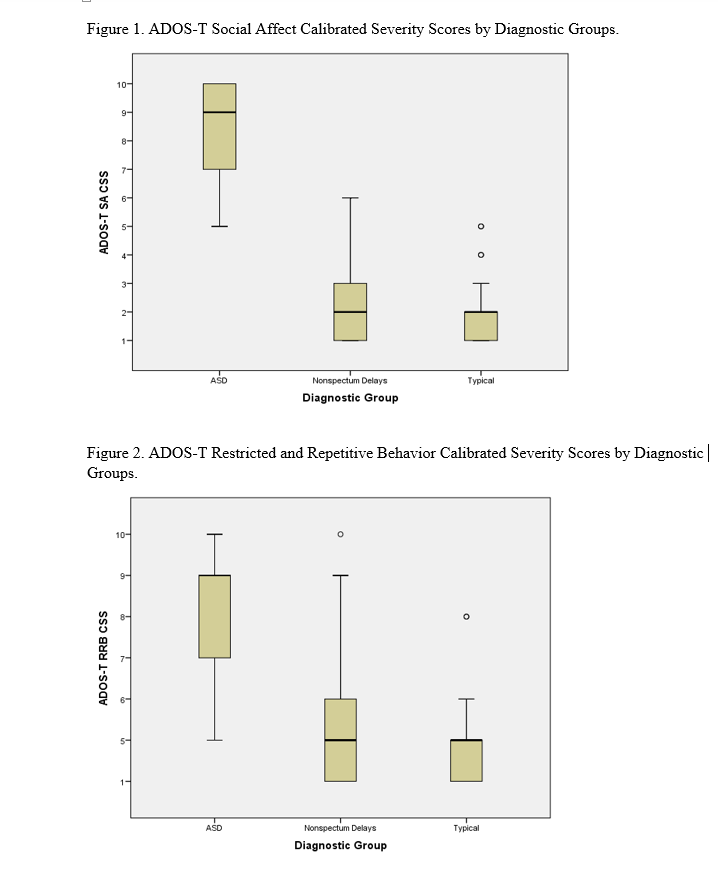