22633
Use of Early Intensive Behavioral Intervention Among Children with ASD: Outcomes for Children with and without a History of Developmental Regression

Objectives: To determine whether (a) children with ASD +/- regression differentially access EIBI and (b) those with regression respond differently to EIBI, as no studies have compared EIBI-treatment outcomes between regressed and nonregressed groups.

Methods: Data were collected from 2,695 children with ASD (86.6% male; M age = 9 years, SD = 3.6, range = 4 to17 years, 11 months) who participated in the Simons Simplex Collection (SSC). All were determined to meet CPEA criteria for ASD based on clinical judgement and cutoff scores on the Autism Diagnostic Interview—Revised (ADI-R) and the Autism Diagnostic Observation Schedule(ADOS). Regression status was operationalized as a language and/or social-engagement loss at/before 36 months of age, per the ADI-R. Use of EIBI at any time between ages 0 to 4 was determined according to parent report on the SSC Treatment History Form. A continuous measure of EIBI intensity was calculated by multiplying the number of hours of treatment per week by the number of weeks treatment was received each year (hrs/wk*wk/yr). Outcomes of interest included cognitive functioning, adaptive behavior, and ASD severity as measured with the ADOS comparison score.

Results: A total of 737 (28.4%) children reportedly experienced a language and/or social regression at/before 36 months, while 770 (28.6%) had participated in EIBI at some time between ages 0 to 4. Children with skill loss consistently accessed EIBI at higher rates than nonregressed children (45% vs. 23%, respectively). EIBI intensity did not differ between regressed and nonregressed groups from ages 0—3; however, by age 4, children with skill loss were receiving more intensive EIBI (med = 520 hrs/wk*wk/yr) than those without loss (med = 480 hrs/wk*wk/yr, p= .04). Regression status did not interact with EIBI intensity to predict functional outcomes; however, within groups (loss or no loss), scoring patterns for cognitive and adaptive-functioning were highly similar, with those who received the most intensive EIBI consistently demonstrating significantly poorer outcomes compared to those who received no EIBI.

Conclusions: While children with ASD and regression demonstrate lower average cognitive and adaptive functioning compared to those without skill loss, these groups have comparable functional patterns based on EIBI intensity, suggesting similar responsiveness to EIBI. The most intensive EIBI may be implemented for those with the lowest levels of functioning; however, both pre-treatment baseline measures and longitudinal studies are needed to determine EIBI efficacy relative to skill loss. 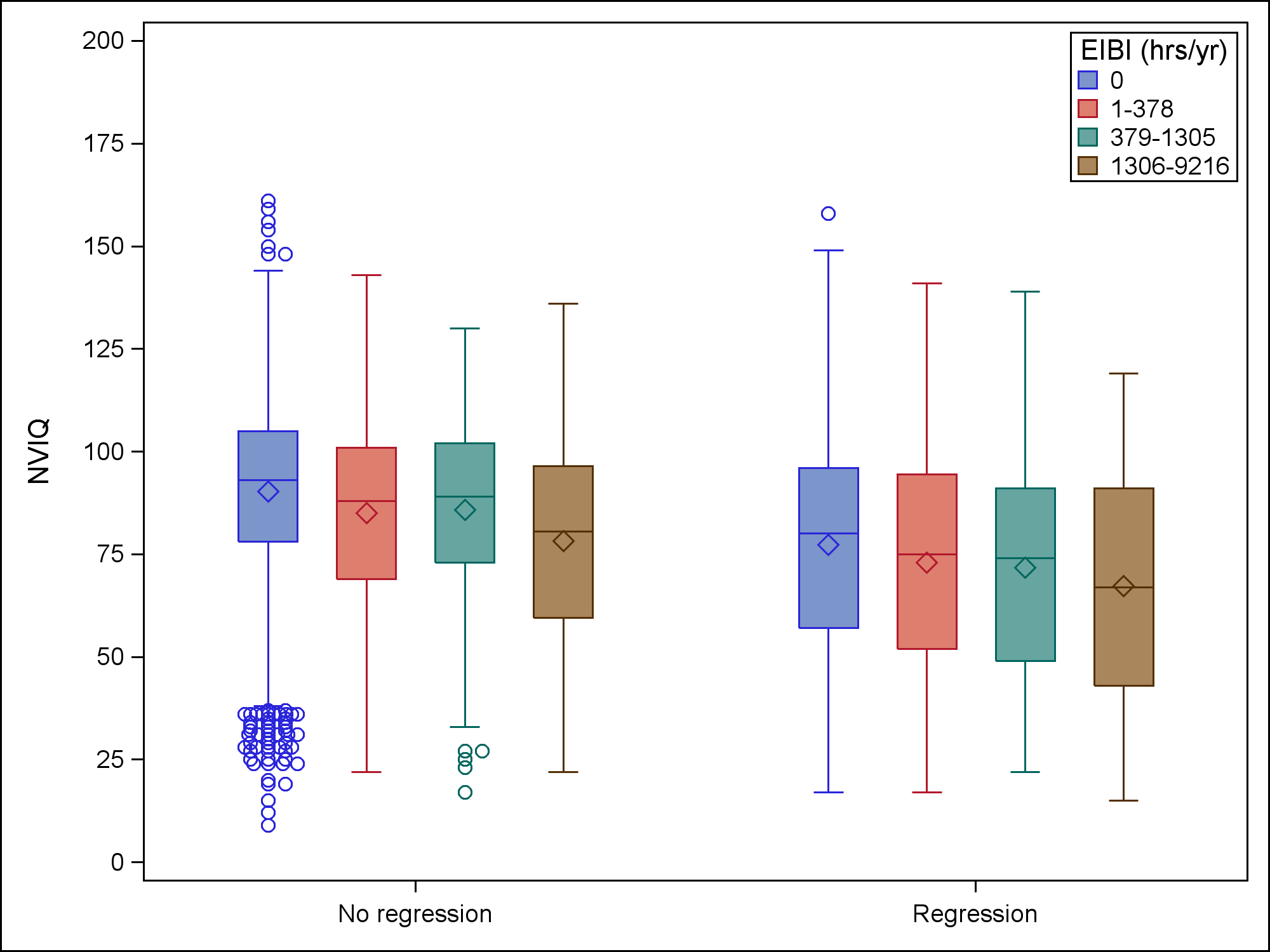