Objectives: To investigate the evolution in time of skill (sequence) learning and the modulatory effect of vestibular stimulation, in 3 groups of children ages 6-13, comparing minimally-verbal ASD with ADHD and typical development (TD) children.

Methods: All children (N=45) were trained on a touch version of the cognitive related visual-motor SRT task, with 10 short (<300 trials, few minutes) weekly practice sessions. In the task, a fixed sequence of 12 spatial locations, cyclically repeated 8 times in each block of trials, was introduced via visual cues on a touch tablet. The responses were made by rapidly touching the cued location with a finger, thus, unbeknown to the children, the cues introduced a sequence of lateral movements to be learned. The measures for learning were the median and the mean of the series response-time (RT). Each group was divided into two sub-groups, one of which received a vestibular stimulation prior to each training block.

Results: All groups showed gradual median RT improvement (Figure A) with significant speed gains across the training period. The ASD children (n=18) were overall slower (by ~200 ms), with initial intermittent pauses that required prompting to resume. Importantly, the ASD sub-group who received vestibular stimulation (n=10) had significantly larger median speed gains and fewer long pauses in comparison to ASD controls. Vestibular stimulation had no effect on TD and had a small reversed effect on the ADHD group.

Conclusions: These results suggest that vestibular stimulation has a positive effect on learning in minimally-verbal children with ASD, which may have important therapeutic implications. Furthermore, contrary to some previous findings, minimally-verbal children with ASD can acquire and consolidate procedural skills with few short training sessions, spread over weeks, and with a similar time course as non-ASD controls. We suggest cortical arousal as a possible mediating variable, explaining the vestibular effect. For the ADHD group, the lack of positive vestibular effect could be attributed to the short and non-demanding practice sessions we used.  For the ASD group, increased arousal may overcome their known deficits in disengagement and reorienting of attention and enhance sequence learning. 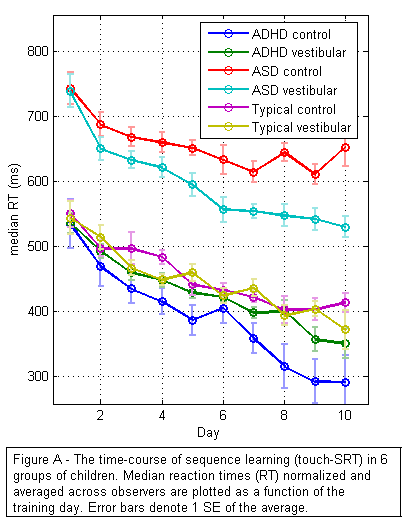