Hall A (Baltimore Convention Center)
S. Ahlquist, University of Michigan, Ann Arbor, MI
Background: (Category: Technology Demo) Children with autism spectrum disorder (ASD) often face an array of sensory challenges resulting in delayed abilities in fine motor skills and quality of movement. Re-imagining the interface with technology as both a large tactile surface and a physical environment, the senses beyond just the visual can be engaged as a part of the grading of movement and fine motor skill-building process. Deep pressure is often used to provide sensory regulation for those with dysfunctioning tactile, vestibular and proprioceptive sensory systems. Using a highly stretchable textile as a pressure-sensitive responsive interface suggests that deep-pressure can be provided as a part of activities aimed at developing fine motor skills.

Objectives: To improve the grading and quality of fine motor movements.

Methods: The technology utilizes custom knitted textiles as highly stretchable, pressure-sensitive interfaces. The Microsoft Kinect is used to measure the amount of pressure being applied at any point on the textile.Two prototypes have been developed, StretchCOLOR and StretchPLAY, to test the efficacy of activities using large-scale textile interfaces for improving quality of movement. StretchCOLOR acts as a large-scale coloring book where increasing pressure on the textile changes the hue of the color being used, for instance an initial touch outputs a red color, changing to orange and yellow as the amount of pressure applied increases. StretchPLAY is a large-scale play structure where climbing along and through the stretchy textile surface triggers various sounds clips to play and animations to be projected onto the textile.

Results: Diagnostics in the software are measuring aspects of interacting with the textile interface such as frequency of touches to determine pace of movement, depth of touch to determine range of pressures being applied, and location of touch to determine amount of task being completed. Data is currently being collected with the prototypes being used regularly as a part of the ABA program of several children at a local therapy center.

Conclusions: The development and application of this technology involves collaboration between architecture, psychiatry and kinesiology. It looks to create a robust multi-sensory experience of technology, providing activities aimed at developing fine motor skills. Through anecdotal evidence, the technology has shown to be engaging, rather than engrossing, allowing children to enjoy the activities while secondarily encouraging social interaction. 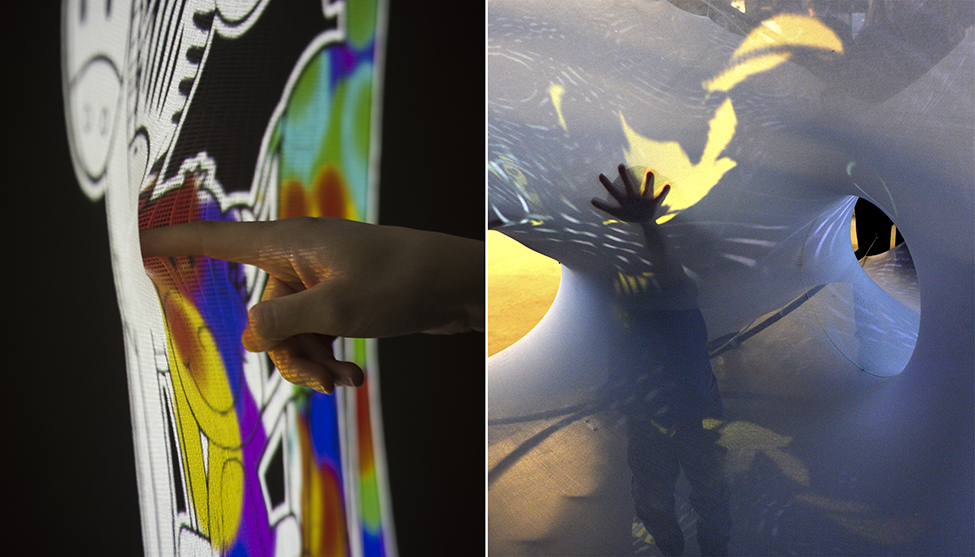