23018
Do Shared Mechanisms in Autism and Depression Underlie This Comorbidity?

Depression is a leading form of clinical impairment for adults with autism spectrum disorder (ASD).  Both depression and autism separately have been linked to deficits in social motivation and affect modulation (i.e., reflexive neurological responses to emotionally evocative stimuli).

Rumination is a robust predictor of depression in the general population (Robinson & Alloy, 2003) and conceptually similar to cognitive perseveration associated with ASD. Thus, social motivation, affect modulation, and rumination warrant study as indicators of potential mechanisms underlying depression in ASD.

(1)    To assess the relation between mood, rumination, and social motivation in an adult ASD sample;

(2)    To provide evidence of biomarkers of rumination and affect modulation while directly comparing adults with ASD, depression (DEP), and typical development (TD) on these constructs.

Neither rumination nor social motivation scores were significantly associated with age or verbal IQ in our ASD sample, nor were they associated with each other. Rumination scores, however, were strongly related to depressive symptoms (r=.662; p<.001) and to insistence on sameness (r=.545; p<.05). Pupillometry will be tested as a biomarker in which pupil wave amplitude operationalizes initial affect modulation, and latency has additional implications for rumination (Siegle et al., 2003). We expect to see sustained arousal (per pupil response to single stimuli) and attentional bias (per eye-tracking of paired stimuli) specifically to sad faces, images, and sentences in our three clinical groups compared to controls. We hypothesize that pupil response to positive facial stimuli will be related to self-reported level of social motivation.

Creating evidence-based care for common and impairing comorbidities may be the most direct line to improving quality of life and reducing general health care needs for individuals with ASD as they age into adulthood. Ideally, treatment for depression in ASD should be guided by research into the multiple potential causes for these two disorders to co-occur, and the ways in which those mechanisms might interact. Studying this comorbidity may also provide a novel opportunity for discovery about the mechanisms themselves. 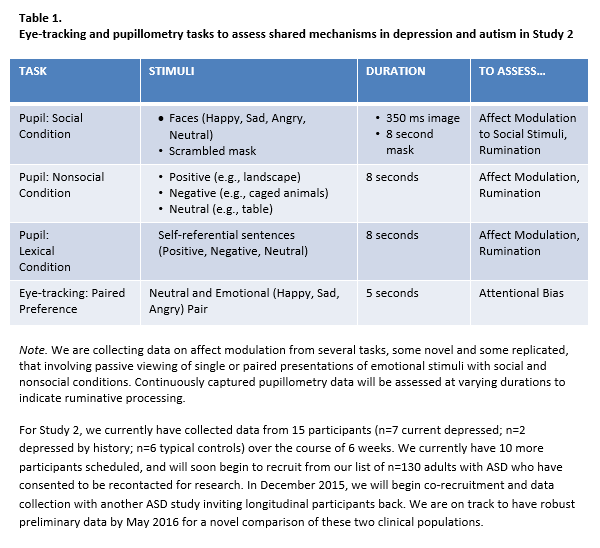